COLUMN: Mid-season predictions point towards a Red Sox-Cubs Fall Classic
"On The Ball" 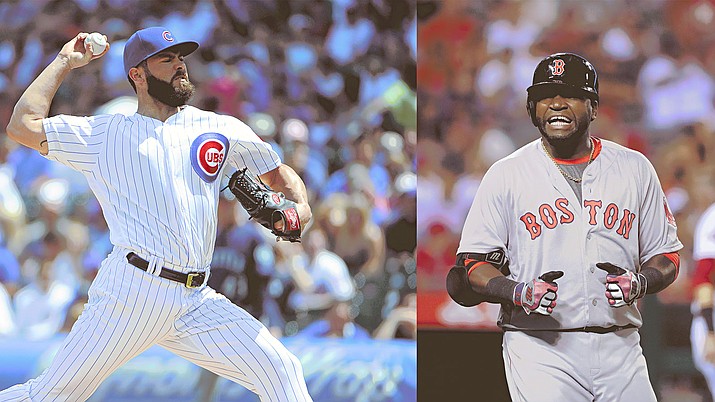 Chicago Cubs starting pitcher Jake Arietta, left, and Boston Red Sox designated hitter David Ortiz could meet up in the 2016 World Series, but a lot has to happen between now and then. (File Photos/Associated Press)

With the trade deadline upon us, it’s time to groan over preseason predictions with a Homer Simpson-like, “Doh!”

Returning to the drawing board, researching what each club is made of and beginning anew with predictions for the stretch run into October baseball is always fun, but never easy.

I’ve always considered Aug. 1 the time to really start paying attention to the baseball season. Not that the previous four months meant squat, but by Aug. 1, the men have usually separated themselves from the boys.

Of the 31 baseball analysts polled by ESPN at the beginning of the season, 14 picked the Chicago Cubs to win the World Series. I can’t say I disagree with them.

According to baseballreference.com, the Cubs are No. 1 (16.7) in the big leagues in WAA, or “Wins Above Average,” a statistical oddity that breaks down each position and averages its WAR, or “Wins Above Replacement.”

Huh? Welcome to the new world of baseball analysis and the sabermetric community.

With the addition of left-handed fire-balling closer Aroldis Chapman from the New York Yankees this week, the Cubs easily have one of the best rosters in baseball.

Throw in skipper Joe Maddon, unlimited funds to get any player they please, and a farm system still considered in the middle of the pack, and the Cubs are going to be good for a long time.

In the American League, 25 of those same 31 baseball analysts polled by ESPN picked either the Houston Astros, Toronto Blue Jays or the Kansas City Royals to make the Fall Classic.

Surprisingly, Tony Blengino of FanGraphs Baseball picked the Cleveland Indians to represent the AL this October. Hopefully he put some money down in Las Vegas on that gutsy call. The Tribe continue to surprise everyone in baseball with a 4.5-game lead over the Detroit Tigers in the AL Central.

My selection to meet the Cubs in the World Series this season will be the Boston Red Sox, which are just 1.5 games behind first-place Toronto in the AL East, the best division in baseball.

Despite all their injuries, the Red Sox still feature David Price, Steven Wright and Rick Porcello at the top of the rotation. And with Mookie Betts, Dustin Pedroia, Xander Bogaerts and Mr. “I’m-going-to-retire-but-still-have-my-best-season-ever” David Ortiz leading the way, I’m all in on Boston representing the AL in the Series this season. As for who wins it all, well, I still think the Cubs beat the Red Sox in a six-game series, even though I’d love for Chicago to break the “Curse of the Billy Goat” in front of their home town fans, winning their first World Series title since 1908.