Obama passes baton to Clinton, imploring nation to elect her 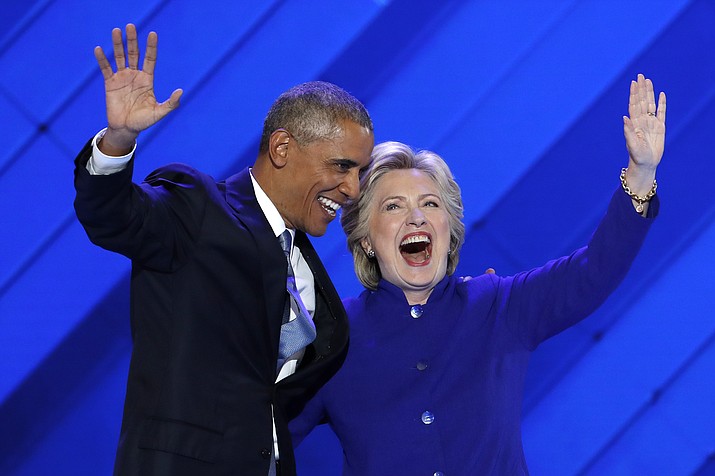 PHILADELPHIA (AP) — Hours of testimonials, urgent pleas and persuasion have led to this. Now, it's time to hear from Hillary Clinton.

The former first lady, U.S. senator and secretary of state on Thursday will step out of the shadows of presidents past for her moment to convince Americans that she is the best choice to helm a nation looking for a new era of leadership.

President Barack Obama anointed her the inheritor of his legacy Wednesday night at the Democratic convention. Delivering a passionate case for his one-time rival, Obama declared Clinton not only can defeat the "deeply pessimistic vision" of Republican Donald Trump but also realize the "promise of this great nation."

"She's been there for us, even if we haven't always noticed," he said.

Clinton appeared unannounced on the platform soon after to soak up the roar of cheering Democrats. She pointed at the man who denied her the White House eight years ago, smiled wide and gave him a hug.

Summoning his most famous line from that 2008 campaign, Obama said: "If you're serious about our democracy, you can't afford to stay home just because she might not align with you on every issue. You've got to get in the arena with her, because democracy isn't a spectator sport. America isn't about 'Yes he will.' It's about 'Yes we can.'"

Wednesday's display was the picture of diversity that Democrats have sought to frame the whole week: The first African-American president symbolically seeking to hand the weightiest baton in the free world to a woman. It culminated a parade of speeches over the last 72 hours — from men and women, gay and straight, white, black and Hispanic; young and old — hoping to cast the Republicans as out-of-touch social conservatives led by an unhinged and unscrupulous tycoon.

Reeling off his greatest hits as president, from the auto industry bailout and health care overhaul to landmark deals on climate change and Iran's nuclear program, Obama said the choice was between Trump vision of "a country where we turn against each other, and turn away from the rest of the world" and "the America I know."

He evoked Ronald Reagan, a move that drew criticism from Clinton when they were rivals, to contrast the Republican icon's vision of America as "shining city on a hill" with Trump's description of the U.S. as "a divided crime scene."

"Our power doesn't come from some self-declared savior promising that he alone can restore order as long as we do things his way. We don't look to be ruled," Obama said.

Trump did his best to steal the spotlight Wednesday.

Following reports Russia hacked Democratic Party emails, Trump said he'd like to see Moscow find the thousands of emails Clinton deleted from the account she used as secretary of state. The appearance of him encouraging Russia to meddle in the presidential campaign enraged Democrats and Republicans, even as he dismissed suggestions from Obama and other Democrats that Moscow already was intervening on his behalf.

Hours later, his campaign tried to cast the remark as "sarcastic." But the candidate did not disavow it.

Trump's comments fed Democrats' contentions that the billionaire businessman is unqualified to be commander in chief. He has no national security experience and has dismissed decades of U.S. foreign policy constants, like standing by NATO allies that long suffered under Russian domination. Yet in a scattershot news conference Wednesday, Trump tried to turn the table on Clinton, saying he believed it unsafe for her to receive national security briefings in light of her mishandling of classified information via email while in office.

On Thursday, Democrats continued to claim it was Trump who is a "dangerous" choice.

"It's an existential choice for the country," the Democratic vice presidential candidate, Virginia Sen. Tim Kaine, said of the election in an appearance on ABC's "Good Morning America."

Kaine was one of several heavy hitters who took the stage Wednesday night, who praised Clinton in Spanish.

"Hillary Clinton is 'lista'," he said.

In what was likely his last prime-time speech of his political life, Vice President Joe Biden delivered a roaring case for Clinton. It was a Biden special, rich with his regular-guy folksiness, misty-eyed storytelling and hard hits.

Trump's "cynicism and undoubtedly his lack of empathy and compassion can be summed up in that phrase he is most proud of making famous: 'You're fired,'" Biden said. "He is trying to tell us he cares about the middle class. Give me a break. That is a bunch of malarkey."

After a quarter-century just behind the men in charge, Clinton on Thursday gets her turn alone with the American public for what is likely the most important speech of her career. She will be tasked with winning the trust of a public deeply skeptical of her honesty, polls show.

Some Democrats still aren't convinced of her candidacy, either, a sentiment underscored by the protests of a small but boisterous set of supporters of her primary challenger Bernie Sanders.

Clinton's campaign said she will lean heavily on the "stronger together" campaign theme in her remarks. She will invoke her 1996 book "It Takes a Village" and will continue to woo moderate Republicans.

Retired Marine General John R. Allen, who has endorsed Clinton, will be joined on stage Thursday night by a group of veterans to focus on Clinton's national security credentials. Allen was Deputy Commander of U. S. Central Command and a former commander of the NATO mission in Afghanistan.

The day after: Clinton says US owes Trump 'chance to lead'
Clinton, Trump use whatever they've got in the final push
Clinton wins Democratic nomination
Hillary Clinton, not on ballot, is star of GOP midterm plan
Final debate: Trump refuses to say he will accept election results (VIDEO)