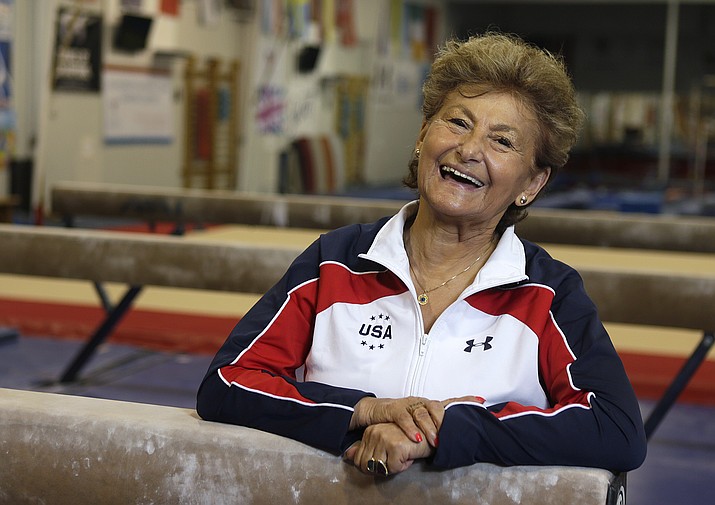 In this May 4, 2016, file photo, Marta Karolyi smiles inside the Karolyi Ranch where she and her husband, Bela Karolyi, train gymnasts, including members of the Women's National Team, in Houston. After 40 years helping some of the greatest gymnasts of all-time — from Nadia Comaneci to Mary Lou Retton to Nastia Liukin — soar to Olympic gold Martha Karolyi is ready to say goodbye. The U.S. women’s national team coordinator is retiring after the 2016 games to spend time with husband Bela and travel.

The face at the top of U.S. women's gymnastics will change next month when longtime national team coordinator Martha Karolyi retires after the Summer Olympics.

The address that doubles as the program's heartbeat will not.

USA Gymnastics has reached an agreement with Karolyi and husband Bela to purchase the training facility the couple owns in Huntsville, Texas. Financial terms were not disclosed, but a closing date of Aug. 24 has been set, just three days after the closing ceremony in Rio de Janeiro and five days before Martha Karolyi's 74th birthday.

"It has everything we could possibly ask for," USA Gymnastics President Steve Penny told The Associated Press. "Along with what it represents to our heart and soul, as a physical facility, we couldn't go out and build it. It's been custom made what for what we want and need. You add up all the elements and it's like 'Dang, what an easy decision.'"

The Karolyis established the rustic estate in Sam Houston National Forest about an hour north of Houston in 1983, eventually expanding it to 2,000 acres. USA Gymnastics is buying 36.2 acres, including three training gyms, housing for up to 300 athletes and coaches as well as a dance studio, dining hall, medical and rehab facilities and recreational areas. The facility will also get a new name: the USA Gymnastics Athlete Development Center at the Karolyi Ranch.

The Karolyis will keep their residence, a hunting lodge Bela Karolyi built and the remaining acreage. USA Gymnastics will have right of first refusal if the Karolyis decide in the future to sell off other parcels of land.

The USA Gymnastics board of directors unanimously approved the sale, pointing to the amenities, the location and the unique aspects of the ranch — which includes a vast array of wildlife from camels to peacocks — that have helped turn the women's national team into an international powerhouse. The five-woman team Karolyi will lead to Brazil next month is heavily favored to back up the team gold medal it won with ease in London four years ago.

"This place has stood the test of time," Penny said. "There are things we have to make sure we do a little bit differently, we have to fix some things. Nothing that is going to require significant work. It's sturdy. It's a sturdy place to be."

Karolyi announced her decision to step down after the Rio Games last summer. The Karolyis are expected to maintain a presence at the ranch, and USA Gymnastics is considering turning an older portion of the main gym — one lined with pictures, medals and trophies from major competitions dating back to the 1980s — into a museum to honor the Karolyi legacy.

"They are still a part of us," Penny said. "They will always be a part of USA Gymnastics. They're still both going to play vital roles for us in the future. Martha will always want to drift into the gym and we'll always want her to do that."

Bela Karolyi joked the sale means "freedom for him" to do as he pleases on the ranch while his wife of 54 years travels to visit family in her native Romania. Though the deal has been in the works for a while, the formal exchange of power will mark the end of an era. The Karolyis defected from Romania to the U.S. in 1981 and the ranch played a vital part in the U.S.'s rise from also-ran to dominant force.

The Karolyis have pledged to donate $250,000 to USA Gymnastics after the sale.

"It's very nice to see that once I'm finishing my job, USA Gymnastics will take over and continue," Karolyi said Monday. "I think that's the best way to preserve the system which proved itself as very efficient and able to produce world-class gymnasts and world-class teams."