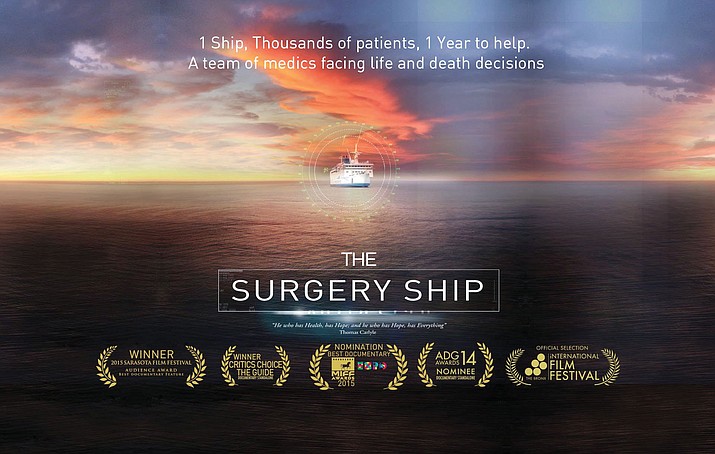 The 7th Annual Prescott Film Festival (PFF) has plenty of great movies, shorts and workshops in its weekend lineup. Workshops are free to the public, and movies – the likes you’ll not likely find anywhere else – are $12.

Today, July 22, Philip Sedgwick tells writers how to get their script into circulation without moving to Los Angeles in his 10 a.m. workshop, Screenwriting: I’ve Written a Script, Now What?

At 11:30 a.m., the Road Warriors will demonstrate the RED Camera, newly acquired by Yavapai College for its Film and Media Arts Program. Movies and TV programs shot on RED include Pirates of the Caribbean, House of Cards and Game of Thrones.

“To say a community college film school has RED cameras and students are allowed to check them out, well, we are real fortunate,” PFF Executive Director Helen Stephenson said.

Friday’s films include Surgery Ship at 1 p.m. about volunteer medical staff that travel to third-world countries. “It’s a beautiful thing these people are doing and a salute to the medical community.” Showing with it is an 8-minute short documentary on Katie Lee, 95, a resident of Jerome. The directors and Lee will attend.

At 4 p.m. is Jeff Lowe’s Metanoia, a biography of a mountain climber who faces a degenerative disease. “It applies to everybody. As you age, your body declines, you find a new passion,” Stephenson said. The 7 p.m. Friday showing of The Man Who Knew Infinity, tells how a self-taught math genius from the slums of India winds up at Cambridge.

On Saturday, festival-goers need to choose between the 4 p.m. showings of American Rodeo: Cowboy Christmas, a documentary feature with some footage of Prescott, and Liza the Fox Fairy, “an homage to director Wes Anderson because of the colors and quirkiness,” Stephenson explained. Made in Hungary, it has subtitles and “cool music.”

The evening film is Growing up Smith (aka Good Ol’ Boy) about a family from India moving to the U.S. in 1979 and the challenges of integration. The filmmakers and costar will be present. Afterward, the free Cabaret After-Party offers Indian appetizers and cash bar.

Make a full day Saturday by also viewing Lives Well Lived (sneak peek, work in progress) at 10 a.m. that tries to answer what that is by asking 40 people ages 75-100. A Skype Q&A follows with the director. The Short Film Program starts at 1 p.m. with six films. Director Bob Reynolds, JFK’s Last Interview, will be present. In the Community Room, also at 1 p.m., Fanarchy shows along with a short called The Dogist.

Sunday and the festival is almost over. A free workshop, Storytelling, the Humanities and Filmmaking, presents Dr. Suzanne Waldenberger to talk about using images to tell a story, not just sell something, at 1 p.m.

Something near and dear to Stephenson’s heart is the Student Short Film Program showing at 2 p.m. Students tell 17 stories in films with most running from 2-10 minutes. Students get a pass to the entire festival, they stay at the dorm and eat in the cafeteria – the total college experience.

“We hope they go on to college. We want to put that spark in them,” she said.

For the festival guide, visit prescottfilmfestival.com.