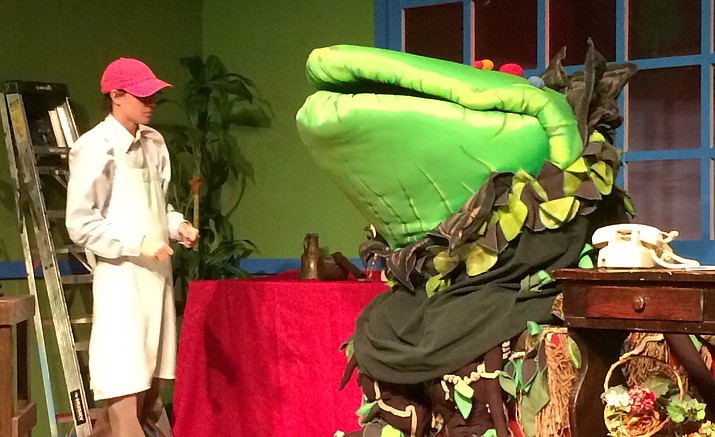 “The Little Shop of Horrors,” a musical, is playing at Prescott Center for the Arts, Mainstage, 208 N. Marina St.

If you’ve never had the pleasure of seeing “Little Shop of Horrors,” this is your chance to experience a joyous, rousing performance.

Seen it before? This version is worth a look, too.

The show is being staged as the Prescott Center for the Arts’ Teen Summer Stock offering, and features a cast of kids from 14 to 19 years old — although that hardly matters.

“Little Shop of Horrors” was a 1960 Roger Corman b-movie horror shlockfest first, and was adapted into a stage comedy-musical by composer Alan Menken and writer Howard Ashman in 1982.

It’s the story of a nebbishy flower-store clerk, Seymore Kelbourne (Aiden Montgomery, who is 14) who develops a new kind of plant that grows prodigiously. Unbeknownst to anyone but Seymore, it also needs human blood to survive, and it talks, demanding to be fed.

Seymore is in love with another clerk, pretty Audrey (Carly Fonda, 15, and already an experienced actor) and names the plant “Audrey II.”

Audrey is in love with a sadistic dentist (played by Michael Morgan), and sees Seymore as nothing more than a friend until … well, you’ll have to go see the show to find out.

Audrey II, played by Kasi Ryan, steals most of the scenes, as a large talking plant is apt to do.

Rob White plays the very Jewish owner of the flower shop and also voices Audrey II, in a baritone that sounds something like Barry White, if he were a carnivorous plant.

This production also comes with a live five-piece band, ably led by Chris Tenney, and the live element adds excitement to the show in way that recorded music could not.

Director Jim Pyduck said he initially balked at the idea of directing a musical, because “my forte is not that.”

Once he agreed to take on the project, he found the kids were very talented. “The average age is 15, and they just blow me away.”

They are a strong cast and you may forget they’re teens as they sing, dance (with choreography by Dahlia Rose), and act at a professional level.

It’s a fun show with a goofy premise. Be advised, there are a few words that parents may not want small children to hear.

Go see “Little Shop of Horrors,” whether it’s new to you or not. The cast alone makes it worth the price of admission.