Chew on This: Restaurants that deliver in Prescott 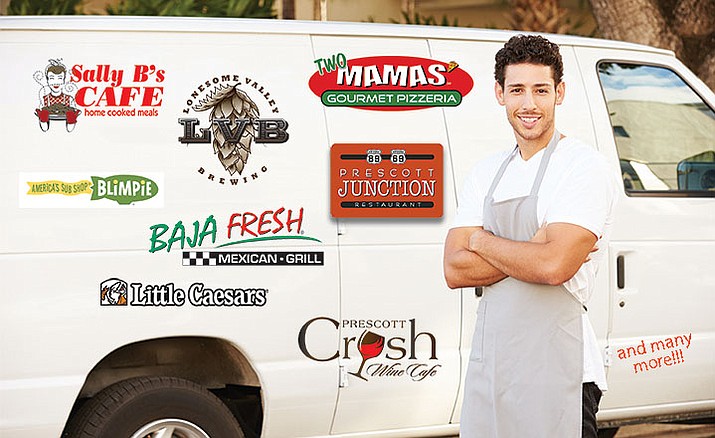 It’s lunch time. For those with a day job, this usually means there’s about an hour to eat and breathe — if you’re lucky.

Some prep for these meals with a sack lunch; some choose to spend a portion of that time driving to-and-from a local eatery; and others opt for delivery.

In a rural area, delivery is typically limited to pizza joints and the occasional sandwich shop. Not so for Prescott. Unbeknownst to many, the area is flush with available delivery options.

The primary reason is because of a local delivery service company called Bon Appetit Dine in Delivery.

The business started in October, 2014, with just a few restaurants signed up and now works with about 25 between Prescott and Prescott Valley. The full list of restaurants that deliver through this service is at BonAppetitDineInDelivery.com.

One restaurant that uses Bon Appetit as well as offers its own delivery service is Two Mamas’ Gourmet Pizzeria in downtown Prescott.

While Two Mamas’ will deliver within seven miles from the restaurant, Bon Appetit will go as far out as the airport or Prescott Valley if a customer requests it.

With every delivery service comes a different fee and a minimum purchase amount.

For Two Mamas’, if the delivery is within a mile of the restaurant, it’s free — except for the expected driver gratuity. Anything outside that one mile radius is an additional $3. The minimum purchase amount is $15 before tax.

With Bon Appetit, delivery is $3.99 if within five miles of the restaurant ordered from and goes up gradually from there as the distance increases. The max delivery fee is $8.99. Most restaurants the company works with require at least a $15 minimum purchase.

Another restaurant with its own delivery service is Park Plaza Liquor Deli off Goodwin Street in downtown Prescott. The restaurant/liquor store delivers within a five mile radius, charges a $2.50 delivery fee, and requires a $20 minimum food purchase.

If the $20 minimum food purchase is met, the business will also deliver whatever the customer desires from the store. This can include cigarettes and alcohol, which identification cards are checked for.

“Part of being a liquor store, we understand that people don’t want to drink and drive, yet they still want to order some food from the house, so what better way to overcome that issue by having that service available to them,” said Park Plaza Liquor Deli beer manager, Max Kamen.

If those service fees are just too much to stomach, then there are alternatives.

“El Charro has been in Prescott since 1959 and there are people who have been eating there since it opened, so I don’t want to penalize them just because they can longer get up to the restaurant,” said El Charro owner, Gary Denny.