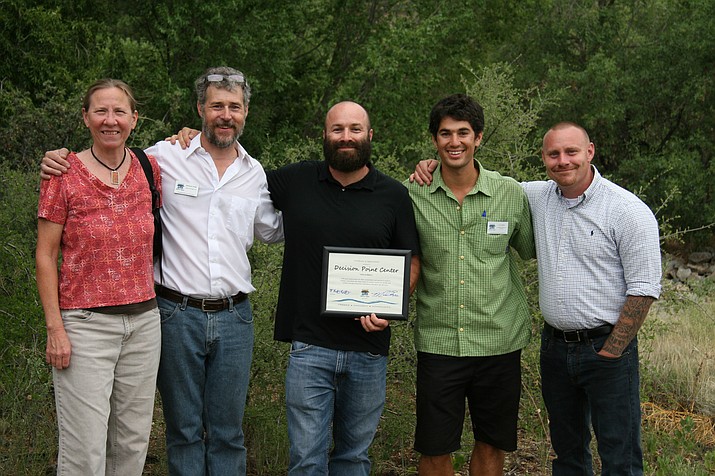 PRESCOTT – Prescott Creeks, a local nonprofit organization with the mission to achieve healthy watersheds and clean waters in central Arizona, held an awards celebration June 27 to recognize its community volunteers.

Among the top honorees was Decision Point Center, a substance abuse treatment facility for adults recovering from drug and alcohol abuse and addiction.

Michael Byrd, executive director of Prescott Creeks, said Decision Point has worked with the organization for years – taking on tasks such as planting trees and removing invasive plan species.

Groups of about 30 clients from Decision Point regularly volunteer twice a month, Byrd said, adding that Prescott Creeks and the treatment center “have a nice rhythm of getting a lot done.”

A news release from Decision Point Center notes that its clients have given thousands of volunteer hours to the community during its eight-year partnership with Prescott Creeks.

“This is Decision Point Center’s second award from Prescott Creeks after receiving the Presidential Service Award previously,” the release states.

Decision Point clients help with restoration and the conservation of riparian areas in the Upper Granite Creek Watershed, and have participated in projects including: the landscaping enhancements of the Adult Community Center on Rosser Drive; repairing and improving systems that help to control storm water runoff; and Watson Woods Reserve clean ups.