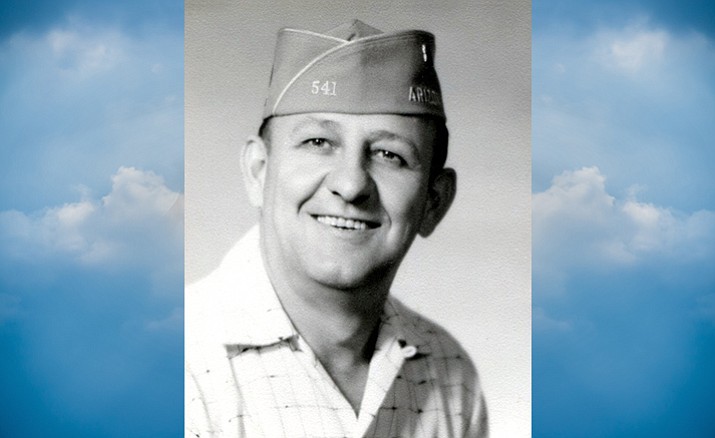 Walter J. Minucci passed away peacefully in his sleep July 1, 2016. He had just celebrated his 98th birthday.

He was born May 17, 1918, to Frank Minucci and Antonia Silva Minucci in Prescott, Arizona. They lived at the Senator Mine. His father worked in several mines in the area. Walt’s dad brought his wife to Prescott when she was due to have her baby. They checked into the Arizona Hotel on Montezuma Street, which is currently the restaurant “Far From Folsom.” This is where Walt was born, on historic Whiskey Row. Walt’s family moved into Prescott in 1919 where they bought the hotel across the street from the train depot. Walt told many stories about watching the trains come into town.

Walt attended Washington School and graduated from Prescott High School in 1937. He played quarterback for Prescott and loved to attend and watch the Badgers play.

During his youth Walt went to work for the Courier and the Journal Miner. He then worked at Alabam Freight Lines. He worked there until he went to World War II in 1942. He married his first wife, Leota Murphy, in 1943 during the war. They were married at Camp Barkley in Abilene, Texas. Walt was part of the Greatest Generation. He was part of the D-day invasion and landed on Utah Beach as part of the 90th Division. In addition to Normandy, he fought in the battles of Northern France, Ardennes, Rhineland, and Central Europe. He received the following decorations and citations: Purple Heart, Good Conduct Medal, American Theater Campaign medal with five Bronze Stars, a Bronze Arrowhead for D-day, three overseas service bars, one service stripe and a French-given Victory Ribbon. After his honorable discharge in 1944 he came back to Prescott and went back to work for Alabam Freight Lines. He bought Bucky O’Neil’s Surplus Store located on Cortez Street in 1947 and sold it in 1978.

Walt was very active in the community and loved Prescott. He joined the active reserves from 1949-1953 and was its chairman to build the current VFW building. He served as Commander of Post 541 and was the All State Commander of the VFW.

After the death of his first wife, Leota, Walt married Alma Jo Stevens in 1996, and gained three daughters. He is survived by them; six step-grandchildren; and six step-great grandchildren; along with nieces and nephews. Walt was preceded in death by Leota and Alma Jo, his parents; four sisters; and one brother.