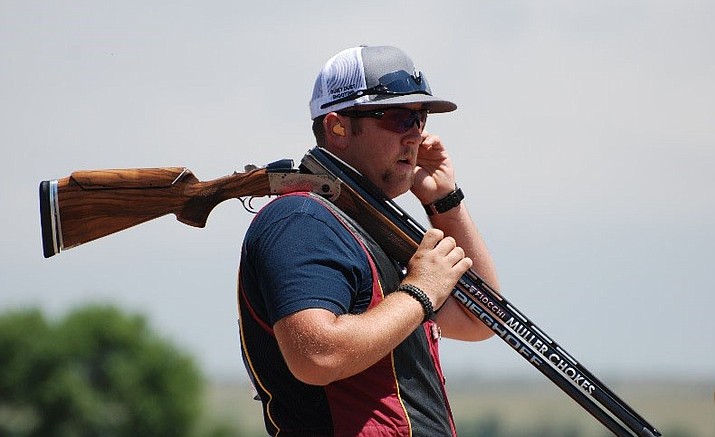 TYLER TAYLOR, a 2015 Wickenburg High graduate, qualified for the United States Olympic Shotgun Team while competing in the USA Junior Olympics in Colorado Springs, Colorado, June 13-18. Taylor took the Bronze Medal in the International Bunker Trap Doubles, competing against some of the best shooters in the nation, including members of the USA Olympic Team. He will soon be shooting with the USA Olympic Team, which will allow him to shoot and qualify to represent the United States in International Competitions. The 19-year-old is currently attended college and shooting for the Arizona State University Shotgun Team. He was the High-Over-All (HOA) shooter in Trap, Skeet and Sporting Clays for Arizona State in the 2015 ASU Collegiate (ACUI and SCTP) competitions. In April 2016, he shot a perfect no-miss round in the 12 gauge – winning the Arizona State Skeet Championship. He started shooting trap and skeet, at age 9, at the Wickenburg Sportsmen’s Club. Taylor is the son of Kent and Laurie Taylor of Wickenburg.

“SELECT-A-SEAT” OPEN HOUSE ON SATURDAY - The Northern Arizona Suns will host their inaugural Select-a-Seat Open House at the Prescott Valley Event Center on Saturday, July 16 from 1 to 4 p.m. At the event, community members and fans will have the opportunity to personally select their seat location for the upcoming 2016-17 season. As part of a special Shoot for Your Seats promotion, fans who purchase their seats on Saturday, or convert a current deposit into a membership, will have the opportunity to shoot a half-court shot and receive their seats for free if they make it. Upon purchasing season tickets, fans will become valued Northern Arizona Suns Sixth Man Members and receive access to a number of exclusive benefits, including private member events and merchandise discounts. Those in attendance on Saturday can also enjoy a number of family friendly activities, including inflatables, face painting, selfie stations and more. Members who have placed their membership deposit prior to Friday, July 15 will be invited to an exclusive one-hour viewing event from 12 – 1 p.m. on Saturday, where they will be able to take advantage of a preferred seat-selection opportunity. Fans interested in a Membership can guarantee their seats with a $50 deposit at NAZSuns.com or over the phone at 928-772-SUNS. The NAZ Suns are excited to bring affordable, family-friendly entertainment and quality basketball to Northern Arizona. A variety of season ticket memberships have been created with the intention to maximize each viewing experience, with packages starting as low as $8 per game for the full season.

THE ANNUAL ARIZONA DIAMONDBACKS BASEBALL ACADEMY Youth Camp will take place from 8 to 11 a.m. July 25-29 at Brad Ziegler Field in Prescott. This academy is the official instructional division of the D-backs. Each camp day and session is choreographed to maximize participation and activity time, D-backs brass say. They add that its instructors are handpicked by the organization from a group of former professional players, as well as the best local collegiate and high school coaches. The camp, which is designed for boys and girls ages 6-14, includes baseball/softball fundamentals training, a D-backs T-shirt and hat, and a free ticket to a 2016 home game with the opportunity to buy additional tickets at a discount. For more information, visit: dbacks.com/academy.