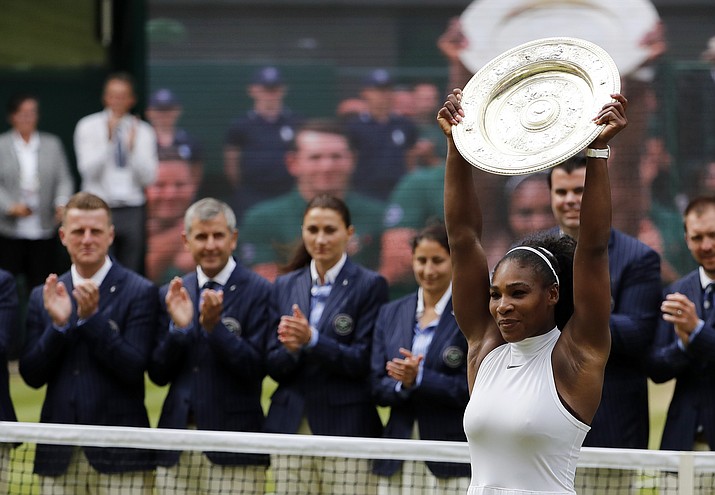 Serena Williams of the U.S raises the trophy after beating Angelique Kerber of Germany in the women’s singles final on day thirteen of the Wimbledon Tennis Championships on Saturday in London.

LONDON — Serena Williams insisted she was not focused on No. 22.

Said she wouldn’t discuss it. Kept coming close without quite getting it. Now she finally has it. And so she can flaunt it.

Williams lifted both arms overhead and raised two fingers on each hand right there on Centre Court to show off the magic number after winning her record-tying 22nd Grand Slam title by beating Angelique Kerber 7-5, 6-3 in the Wimbledon final on Saturday.

“Definitely had some sleepless nights, if I’m just honest, with a lot of stuff,” Williams said. “My goal is to win always at least a Slam a year. It was getting down to the pressure.”

She pulled even with Steffi Graf for the most major championships in the Open era, which began in 1968. Now Williams stands behind only Margaret Court’s all-time mark of 24.

This was Williams’ seventh singles trophy at the All England Club — only Martina Navratilova, with nine, has more in the Open era — and second in a row. The victory at Wimbledon a year ago raised her Grand Slam count to 21, where it remained until Saturday.

“It’s been incredibly difficult not to think about it. I had a couple of tries this year,” said Williams, who went back on court a few hours later to win the doubles title with older sister Venus. “But it makes the victory even sweeter to know how hard I worked for it.”

There was a stunning loss to Roberta Vinci in the U.S. Open semifinals in September, ending Williams’ bid for a calendar-year Grand Slam. Then losses in finals to Kerber at the Australian Open, and to Garbine Muguruza at the French Open.