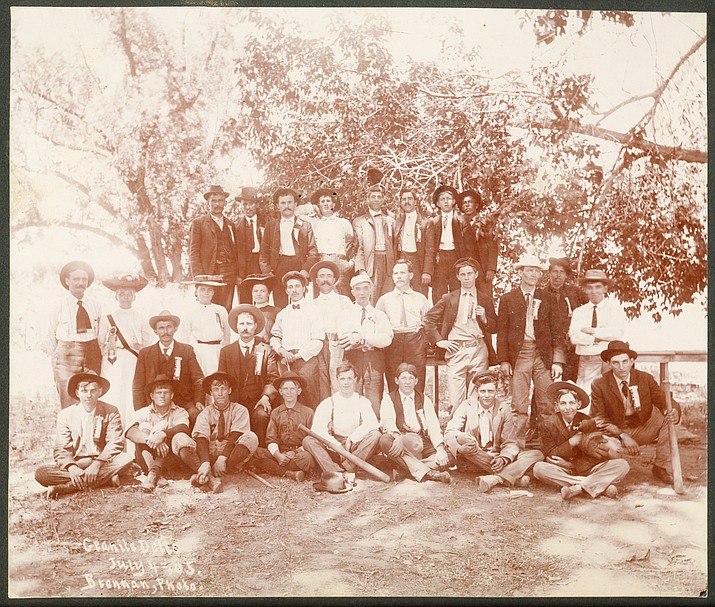 Baseball, the national pastime, has a long history dating back to the 1840s. The game evolved from older bat-and-ball games from England such as cricket and Colonial America era games like one-o-cat, two-o-cat. When most of us think of Arizona history, however, the game of baseball is not the first image that comes to mind.

Early on, the U.S. Army had incorporated baseball as a method to help young soldiers use their free time and excess energies in a positive competition that would foster unit cohesion and pride. In Arizona, once the soldiers stationed at posts such as Fort Whipple, Fort McDowell and Fort Huachuca had mastered the game, they went looking for competition against nearby towns like Prescott, Phoenix and Tucson. It is highly likely that soldiers introduced the game of baseball to the settlers of these early towns for the competition and extra money from wagering on the outcome of games.

Arizona was sparsely populated in 1872. The 1870 census would report that a scant 9,658 hardy souls were living in the young Territory. A decade later, the population would jump to 40,440. Fort Bowie, Fort Whipple and Fort Verde had become active hubs of military operations in the ongoing Indian Wars. Eager to break up the monotony of camp duty, the soldiers began playing baseball. One of the first reports of a game was at Camp Grant between the soldiers of the 23rd Infantry and Troops L and W of the 5th Cavalry on Christmas Day of 1872.

While early newspapers in the 1870s and 1880s often left stories about baseball games off their pages, it was the Army & Navy Journal that later reprinted a post return that captured the action of an exciting Thanksgiving 1873 contest between two nines, with one club traveling from Fort Grant to Fort Bowie. Named the “Neversink” and “Sumner” Base Ball Clubs (abbreviated B.B.C. in most Eastern newspapers), the two played an exciting game for an enthusiastic crowd. Rumored to be among the spectators that afternoon was none other than Apache chieftain Cochise, who saw a high-scoring match where the men from Fort Bowie would emerge victorious by a final score of 39 to 24.

From such a beginning, baseball would see sporadic support through the rest of the decade. Eighteen-eighty would be a landmark year for the number of games being played across Arizona territory. Rivalries between Tucson and Tombstone as well as Fort McDowell and Phoenix would emerge as each town established its own baseball club. Early newspapers would lend a hand in the growth of baseball within their local communities. These newspapers viewed a successful baseball team as a way to promote the advantages of their respective towns over others, hoping to attract new settlers and businesses in an effort to encourage economic growth.

By 1890 baseball had become an accepted pastime and a Sunday tradition in most communities. Townsfolk would look forward to these games as a way to relax and have a good time with friends, and perhaps wager on the outcome of matches for added excitement. The late 1890s would even see a popular women’s baseball club, the Boston Bloomer Girls, visit Phoenix on November 21, 1897. Among the women ballplayers was none other than athletic phenom Maud Nelson, who would usually pitch and play multiple positions during the same game! Despite losing to the Phoenix Baseball Club, 13-7, the Bloomer girls drew “an immense crowd” according to the sportswriter covering the game from the Phoenix Daily Herald.

Early Arizonans loved a good baseball game. Throughout its history, Arizona has been thought of as a place for gunfights, Indian raids, saloons and red-light ladies, but baseball has been with Arizona since the beginning. Arizona and baseball have grown up together.

EDITOR’S NOTE: This article is a summary of a presentation that will be given by the author at the 13th Annual Western History Symposium, to be held at the Prescott Centennial Center on Aug. 6, 2016. For more information visit the Sharlot Hall Museum’s website at www.sharlot.org or call 928-443-5580.

Letter: Historic Base Ball
Days Past: George Washington Bowie, star-crossed officer, a gentleman of the West
Letter to the editor: Base ball, anyone?
Days Past: Fannie Kautz – star of the show
Days Past - Above and Beyond: Arizona and the Medal of Honor