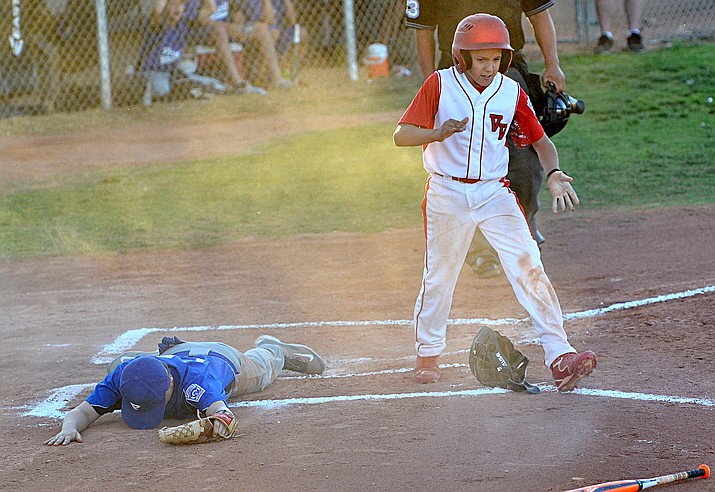 Prescott All-Stars starting pitcher Tyson Potts lays face down in the dirt after a Verde Valley runner scores in the first inning of the District 10 Majors All-Stars Tournament championship game Friday night at Riverfront Park in Cottonwood. (Vyto Starinskas/Special To The Courier)

Gabaldon, who was 2 for 3 with a double and two runs scored, gave Verde Valley a 9-2 lead at that point, and Prescott never recovered.

Logan Kunow’s RBI double down the left field line scored Torrey, making it 2-0, but it was the only time Prescott would lead all night.

“We fell apart. We didn’t have much focus,” Potts said. “Tomorrow we have to come out here and play some tight defense if we want to win it all.”

Potts surrendered six runs, all unearned, on three hits and two walks while striking out six on 86 pitches.

Kunow added that Prescott may have thought they were “going to win it without even trying.”

“We need to focus a lot more tomorrow, and not let anything get us down,” Kunow said.

In the top of the second, Gabaldon’s double appeared to perfectly hit the right field foul line, but two runs scored on a throwing error by Prescott during the same play, making it 2-2.

Verde Valley would score its first eight runs of the contest on eight errors by Prescott, and 10 of their 12 runs scored were unearned.

“We need to go back to basics, catch and throw,” Miller said. “They need to relax, throw the ball, catch the ball and make plays, just like they have all year.”

To add insult to injury, Prescott second baseman Harper Snyder hit a towering home run in the bottom of the second to give his club a 3-2 lead, but was called out at third for missing the bag on Verde Valley’s appeal throw.

And Ben Miranda’s throw from right field to gun down a Prescott runner at home plate put an end to the game by 10-run rule.

“I thought I could throw him out, so I recovered on the bad hop and threw him out at home,” Miranda said. “This is exciting, we need to put the ball in play tomorrow and score runs.”

Prescott (3-1) will send Torrey to the mound Saturday in the tournament finale against Verde Valley in Cottonwood at Riverfront Park.

Verde Valley’s (4-1) starting pitcher was not announced after the game Friday night.

First pitch was originally scheduled for 6:30 p.m., but after discussion between the teams, according to tournament director Jayne Lee, Saturday's finale will be played at 9 a.m.