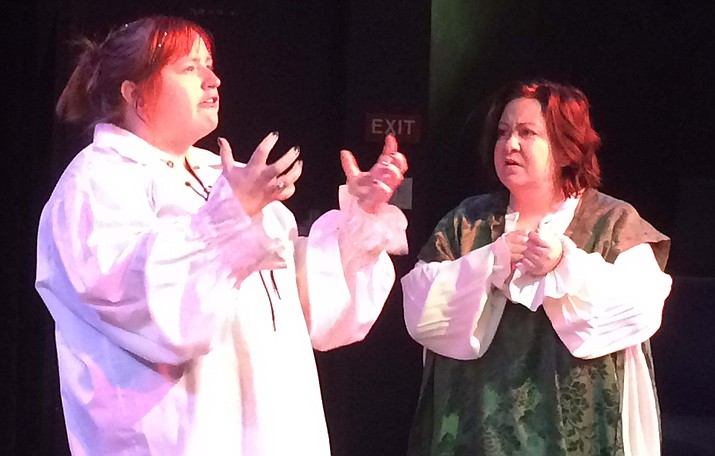 Shakespeare’s “Romeo and Juliet” gets the Stage Too comedy treatment, as Amber Bosworth (left) plays Juliet, who is pursued by a surfer dude version of Romeo (Bliss Streetman) in the PCA ‘s Summer Repertory production of “The Complete Works of William Shakespeare, Abridged (Revised).”

All three shows at Stage Too, accessible from the alley behind the Prescott Center for the Arts at the corner of Marina and Willis Streets.

PRESCOTT – A long-time theatre tradition comes to the Prescott Center for the Arts in July and August as the organization presents its first Summer Repertory Theatre season.

Repertory, also called Summer Stock, is a time-honored format. It typically is a kind of production in which a series of shows is rotated to play in sequence, and has the same cast for all the productions, as well as “stock” costumes and set pieces.

The Prescott version showcases three comedies, all of which are being performed at PCA’s smaller Stage Too venue, under the umbrella title, “Lunacy, Love, and Laughter.”

Catherine Miller Hahn, PCA’s board president, directs N. Richard Nash’s “The Rainmaker,” a story of a ranching family living in a drought who may choose to put their trust in a man who claims he can make it rain.

Hahn said the concept was borne out of practicality.

“We wanted to make sure we were using this facility that we were paying rent on,” she said, noting that it is air-conditioned and is therefore a good place to stage shows during the summer, so that visitors to Prescott could see them.

Paul Epoch, chairman of the PCA’s Summer Repertory committee, also directs one of the three shows, “The Good Doctor,” by Neil Simon.

“The Good Doctor” takes on a series of short stories, written by Anton Chekhov. The character of the Writer (that some critics believe is Neil Simon’s vision of Chekov himself) narrates and bridges the scenes and also appears some of them.

Ever want to see all of Shakespeare’s plays, but just never had the time? Here’s your chance: “The Complete Works of William Shakespeare, Abridged (Revised)” covers all 37 of them, with just three actors, in 97 minutes. There’s no fourth wall, either: the actors speak directly to the audience. Bruce Lanning, who just helmed the PCA comedy “Boeing Boeing” in May, directs this show.

The rotation structure makes it possible to see all three shows in a single weekend, or to space them out over the two months.

Watch for reviews of the shows in the July 1 and July 8 editions of Kudos.

Stage Too’s ‘Complete Works of Williams Shakespeare, Abridged’
3 timeless romantic comedies take to PCA's Stage Too
KornuKopia Calendar: July 28-Aug. 6
Laugh and cry with 'Shakespeare in the Park'<BR>
On Stage: Bringing the rain, and a dose of self-esteem, to Stage Too