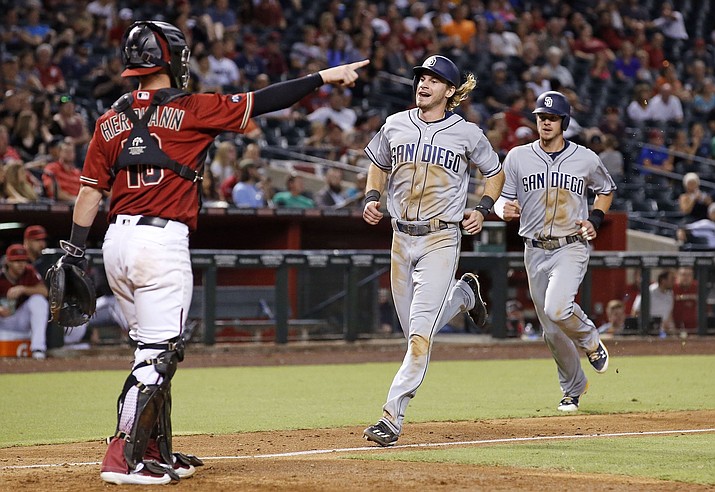 Wil Myers had three hits and drove in a run and Matt Kemp had a two-run single for the Padres, who scored

PHOENIX (AP) — I’m not kidding ewe. The Arizona Diamondbacks really did bring a lamb into their clubhouse to fire up the All-Star voting campaign for third baseman Jake Lamb.

Lamb, and the lamb, posed patiently for pictures prior to Wednesday night’s game against the San Diego Padres.

Pitcher Rubby De La Rosa even got the lamb to wear a sombrero and sit in Lamb’s locker. And the lamb, obtained from a local petting zoo, left a memento on the floor of the Diamondbacks dugout.

Schimpf was hitting .196 with two homers entering the game and one of those came Tuesday night. On Wednesday, he had a two-run shot off Shelby Miller in the Padres’ five-run fourth inning and a solo home run off Josh Collmenter in the ninth for his first career two-homer game.

Miller (2-9) threw three scoreless innings, on one hit, before falling apart in the fourth. Miller, 0-7 at home, allowed six runs in five innings.

Jose Dominguez (1-0) pitched 1 1/3 innings in relief of starter Colin Rea to get the win.

Solarte fell a triple shy of the cycle. His three-run homer came off Collmenter in the ninth. Solarte had a run-scoring single in the fourth and an RBI double in the fifth.

Brandon Drury and Jake Lamb homered for the Diamondbacks, who finished a 2-7 homestand. Lamb has 20 home runs and 61 RBIs.

Arizona fell to 15-32 at home and is in a virtual tie with San Diego for last place in the NL West.

But the wheels came off in the fourth. The Padres had four straight singles to start the inning and an RBI groundout before Schimpf sent Miller’s 2-0 pitch into the seats in left field to put San Diego ahead 5-4.

San Diego claimed RHP Jake Smith off waivers from the San Francisco Giants and assigned him to Double-A San Antonio.

Diamondbacks: 2B Jean Segura left the game with a bruised left triceps after being hit by a pitch in the second inning. X-rays were negative. ... Manager Chip Hale said RHP Zack Greinke has thrown lightly with trainers in the training room. Hale said Greinke (strained left oblique) will get on the field when the team goes to San Francisco this week “and just play catch and see how it feels.”

Padres: RHP Drew Pomeranz (7-7, 2.65 ERA) gets the start Thursday night when the Padres open a three-game series against the Dodgers in Los Angeles. RHP Hyun-Jin Ru will come off the DL to make his season debut for the Dodgers.

Diamondbacks: Arizona has Thursday off. LHP Patrick Corbin (4-6, 4.90) starts Friday night in the opener of a three-game series in San Francisco. RHP Jeff Samardzija (8-5, 3.97) goes for the Giants.