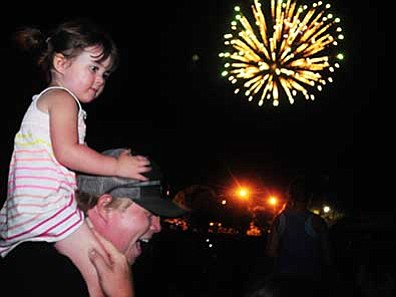 Alan and Quinn Sprang enjoy the fireworks show during the 2014 Fourth of July celebration at Pioneer Park in Prescott.

PRESCOTT – It will be largely “trial and error” this year for holiday revelers who want to catch the City of Prescott’s fireworks show from areas outside of the immediate downtown.

Because this is the first year that the Fourth of July fireworks will be launched from the city’s downtown parking garage, organizers say is it will be difficult to gauge exactly where the best views will be.

Still, there are some places that are sure bets.

Steve Gottlieb of Eagle Management and Events LLC, the organizer of the celebration and fireworks this year, says the Mile High Middle School football field is the most obvious spot. The celebration event venue – just across the street from the Granite Street parking garage – will accommodate 5,000 to 6,000 people, he said. Admission is $5 per person (4 and younger get in free).

Also likely to be a sure thing for watching the fireworks is Whiskey Row. Even though the street will not be shut down to traffic for the event, people should be able to catch the fireworks from the sidewalks along Montezuma.

Some of the steep streets bordering the downtown, such as Union Hill, could also offer a good view, Gottlieb said.

For those who want to watch the fireworks without being directly downtown, Prescott Recreation Services Director Joe Baynes says some of the city’s parks should offer spots for fireworks viewing. He suggests portions of Granite Creek Park, 554 N. Sixth St., and Acker Park, 421 S. Virginia St.

“This year, it’s a lot of trial and error,” Baynes said, noting that a number of factors, such as the height of the fireworks and the position of trees, would play a part in the visibility of the display.

While the annual New Year’s Eve Boot Drop regularly includes fireworks from the top of the parking garage, Gottlieb says the July 4 display would have a larger viewing area, because it will be higher and fuller than the Jan. 1 display.

For more than a decade, the city conducted its Fourth of July fireworks display at Pioneer Park in northeast Prescott. Prior to that, the fireworks launched for years from the Prescott High School football field.