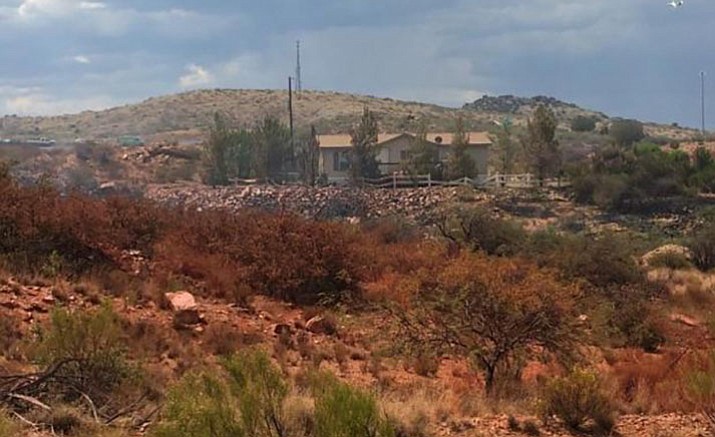 The land and brush surrounding homes in the Cordes Lakes area are stained red from slurry dropped to fight the Bug Creek Fire. No structures were lost in this wildfire, which torched 1,080 acres of grassland.

The Lion Fire, burning about six miles south of Crown King on Bureau of Land Management land south of the Bradshaw Mountains and north of Lake Pleasant, was still about 160 acres and is now 90 percent contained Saturday morning.

Shortly after 4 p.m. Tuesday, June 28, the Forest Service detected the wildfire, which is deemed lightning-caused burning in grass and chaparral with no threat to structures.

The Lion Fire has seen no growth over the past few days. Due to its remote location, rugged terrain, the fire continues to be monitored by aircraft with ground resources available. The fire has received significant moisture over two days but still has a small active area in the northwest portion of the fire. This active area is well inside the fire parameter and causes no threat to unburned vegetation.

Resources will remain committed to the Lion Fire due to the weathers forecast of drier air filtering into the area Sunday and into next week.

The fire is approximately one-half mile from the border of the Prescott National Forest and fire crews – about 20 personnel – are in place if it becomes active and moves north, officials said.

Firefighters continue to monitor the fire using aircraft. Fire managers have strategically positioned resources in the community of Crown King as a precautionary measure.

The fire continues to receive significant moisture and air-attack personnel have reported minimal fire activity on the north edge. Smoke is visible, however, in Crown King.

Resources on the Lion Fire include three engines and two helicopters.

The Bug Creek Fire remains at 1,080 acres and is 100 percent contained as of Saturday morning, near Cordes Lakes and Interstate 17.

Thirty personnel are working the fire, looking for hot spots and continuing to mop up and patrol the burn area and fire lines.

The Forest Service reports that 23 fires are active in Arizona in the past month, according to the incident command website, with personnel actively working 15 of them.

Those 15 fires range in containment from 50 to 95 percent, and 25 acres (the Red Spring Fire on the Coronado National Forest) to 45,977 acres (the Cedar Fire near Show Low), both of which are 90 percent contained.

Fire crews have received a lot of help from the recent monsoons; however, the threat of fire is still Very High to Extreme, and burning is suspended under fire restrictions across the state.

• Campfires, charcoal grills, and stove fires (wood, charcoal, and coal burning) are prohibited on all Prescott National Forest lands, roads, and trails; except within developed recreation sites where grills and campfire rings are provided. (The use of petroleum-fueled stoves, lanterns or heating devices is allowed providing such devices meet the fire under writer’s specifications for safety).

• Smoking is prohibited except within enclosed vehicles, buildings, or developed recreation sites where the area is cleared of all flammable material.

• Discharging a firearm is prohibited, except while engaged in a lawful hunt pursuant to state, federal laws and regulations

• Fireworks are always prohibited on all national forest lands.

Know Before You Go! To help you understand where and when fire restrictions and possible closures exist, check at www.wildlandfire.AZ.gov or www.firerestrictions.us or call 1-877-864-6985.