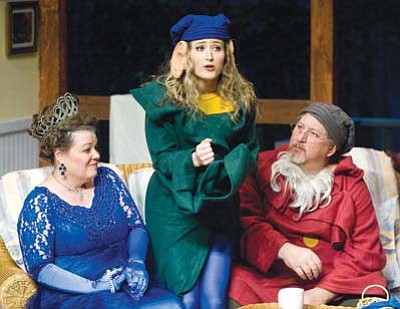 The good humor in the show is well-balanced among all the actors, but a lot of it comes from Vanya and Sonia's cleaning woman, Cassandra. Dressed like a hippy flower child, she's prone to visions of the future but can't seem to deliver them in an indoor voice. Plus, not only is she unable to fully explain what she's seeing, no one initially believes her. She also has her own ways of solving problems, one of which happens to be a voodoo doll that looks like Masha. Plenty of other humor comes from the interactions of Vanya, Sonia and Masha. At one point, Spike has stripped down to his underwear and run off to a pond near the house and Vanya is looking at him through binoculars while Sonia and Masha are arguing with each other. They ask Vanya a question and his response is humorously distracted without even looking away from the binoculars. The same scene also has Masha take the binoculars away from Vanya who proceeds to look through his hands like binoculars, just as a child would.

But the way Perpich makes Vanya so eager to keep looking through some sort of binoculars, real or otherwise, speaks to the great acting throughout the show. Sapecky early on shows what she's going to be capable of throughout the show when Sonia sweetly asks Vanya if he'd like her to warm up his coffee, only to blow up and throw the cup across the room mere seconds after he passes it to her. She's able to go from zero to 100 many times over throughout the show, but does so in a humorously different way late in the show upon getting a call from a guy she had met the previous night. Sonia's freakout and running away from the phone before coming back to it and answering the guy normally are very well done. Veatch is highly believable as a young person star-struck by Masha, while Fine wonderfully portrays someone trying to retain her youthfulness through younger men, but coming to grips with the fact that she, too, is aging. Perpich is commended for his very dense monologue in the second act; it is superb and he hits every note very well.

Initially though, this monologue seems like the playwright Durang is derailing everything with a gigantic rant about the good old days and how much better they were, as portrayed by Perpich shaking his stick and yelling at kids to get off his lawn. However, through Vanya, Durang is telling his audience some very thought-provoking things about the direction he sees the future generation moving, how the past may have had its problems and elements that weren't very enjoyable, yet being an overall simpler time where people had an easier time sharing experiences. Durang's character opens up to his audience, and Perpich pulls off the monologue extremely well.