Meet the man who expanded the Star Wars universe 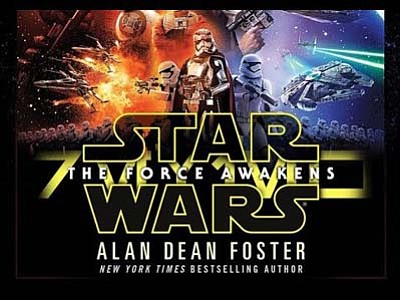 Novels revolving around the "Star Wars" universe have been a complement to the franchise since the film was first released in 1977, though only those released after April 2014 are considered part of Star Wars canon now.

One of the many authors of these novels is Alan Dean Foster, whose "Star Wars" novels include the original novelization for "Star Wars," first published as "Star Wars: From the Adventures of Luke Skywalker" and "Splinter of the Mind's Eye." Foster, a Prescott resident, will appear at Peregrine Book Company, 219 N. Cortez St., at 2 p.m. Saturday, Jan. 23, for a reading of his novelization of "Star Wars: The Force Awakens," with a Q&A and book signing.

Foster had done a number of film novelizations before his original novelization of "Star Wars," he said. When asked by George Lucas to do the novelization, Foster knew of his previous films, "American Graffiti" and "THX-1138" and considered him a good filmmaker, so he did it and the book's sequel, "Splinter of the Mind's Eye." Though both books had some eventual canonical issues, Foster tells critics that's because they were written before the film came out, he said.

"They were written before ... George figured everything out," he said.

But there are differences in writing the novelizations for Disney, Foster said. When novelizing the first film, Lucas read it and loved it, he said. However, when a company pays $4 billion for the rights, its desire to make a definite date for restarting the canon are justified, Foster said. Further, a lot more people want to keep everything straight, especially when others can complain about canonical discrepancies online within hours, he said.

Thus, everything written in the novelization of "Star Wars: The Force Awakens" became canon, Foster said. Though there ended up being less in the book that he'd like, there's a reason for it, he said. He can't include various elements not mentioned in the film, like Rey's parentage, because they could conflict with later films.

He does enjoy signings. After all, any artist likes to have his work appreciated, Foster said.

At the signing, people can ask questions not just about the "Star Wars" novels, but anything pertaining to Foster's body of work, he said.

"If I can answer it, I'll be happy to do that," Foster said, noting that Prescott is his hometown and it's "nice to meet your neighbors."