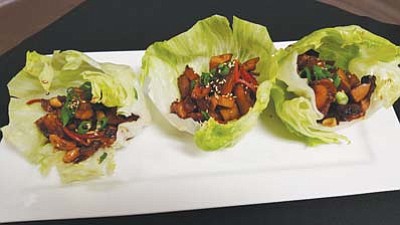 It's a new year and with it comes new beginnings, which could mean trying something new at a favorite restaurant or checking out a new restaurant altogether. There's also the chance that those New Year resolutions have already been broken and one desire might be to eat those tears away. No matter the case, there are plenty of places around Prescott to eat, with appetizers included.

Here are a few appetizers that several Prescott restaurants offer, ranging from the simple to the deluxe.

Sometimes, all you want is a simple appetizer before the meal. For that, there's the Gurley Street Grill, 230 W. Gurley St. with its beer battered onion rings. Golden fried and sprinkled with parmesan cheese, they're $6.99.

The Office Restaurant and Cantina, 128 N. Cortez St., has its "Starting Lineups," presenting a relatively simple starter in the way of the Tres Salsas Sampler, freshly made corn chips with house salsa, tomatillo salsa and black bean with roasted corn salsa. It's $4.95.

Maybe a very simple appetizer isn't what you want, but you still hanker after something on the light side, so as not to ruin your appetite or that New Year resolution (if it hasn't already been tossed aside). Augie's Restaurant, 1721 Highway 69 in Frontier Village, can help as it offers Lettuce Cups. The cups contain chicken, cashews, and soy-ginger sauce, all served in iceberg lettuce, for $6.96

But appetizers can also be pretty sophisticated, like those at El Gato Azul, 316 W. Goodwin St. Go for the Tequila Shrimp, tiger shrimp sautéed in a habanero-infused oil with pico de gallo on a bed of cumin tortilla strips. $11.