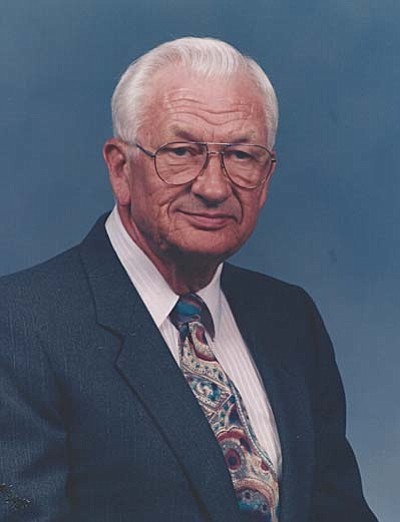 A. James "Jim" Stewart, 83 of Prescott, Arizona, passed away Jan. 10, 2016 after a long battle with prostate/bone cancer. A man of integrity and great love for the Lord, he saw value in everyone, a powerful asset for his long career as a Jr. High counselor.

Jim was born Sept. 3, 1932 in Stella, Nebraska, the second son of Sidney and Floye Stewart. He was preceded in death by his parents and brother, Clarence (Marjorie). He is survived by Vera, his wife of 31 years; sister Marion Koeritz (Fred); and niece Judy Stewart (Dave Shrader).

Jim grew up in Nebraska, and worked for a time as an agent telegrapher for the Missouri Pacific Railroad. He served in the U.S. Army during the Korean Conflict (1953-55), after which he attended Peru State Teachers College in Peru, Nebraska on the GI Bill. After graduating, he accepted a teaching job at Walker Jr. High in Cypress/Buena Park, California. After obtaining a Master's degree from Chapman University, he continued working at Walker Jr. High, but as a counselor, finishing out a 35-year career at that school.

He had a special love for the Rocky Mountain National Park in Colorado, where, since the age of three, he spent summers with grandparents who ran a cabin camp there. In 1953, he with his parents and siblings bought property in Moraine Park, which is located within the national park, becoming "in-holders." Jim only missed spending some time at the cabin every summer five or six times since age three. Hiking the many trails and climbing mountains was very special to him, as he introduced Vera and his kids and grandchildren to the majesty of "Rocky."

Jim was a very athletic guy - basketball was his game in high school. He particularly enjoyed membership on the Yavapai College Roughrider Board and attending the YC soccer games. He enjoyed bowling - for several years he organized the Prescott Noon Lions bowling teams for the annual Big Brother/Big Sister bowling event.

Volunteer work with his Noon Lions buddies on the Thursday shredding crew at YRMC was an especially anticipated weekly event. At the Prescott United Methodist Church - where he and Vera were active members after they moved from Tustin, California to Prescott in 1995 - Jim became a Stephen Minister and Leader in 1996, took an active part in the Men's Club, ushered and enjoyed the weekly Men's Bible Study class. In fact, the men in that group journeyed to Jim's room at the Adult Care Home in Prescott Valley and held their weekly class for several months during 2015. Active participation in the Saturday Granite Park Hunger Ministry was a weekly routine until his illness prevented that activity.

The family is especially grateful for the Granite Mountain Hospice and loving care provided during Jim's last year by the New Horizons Adult Care Horne on Long Look Drive in Prescott Valley.

A Celebration of Jim's life will be at 10 a.m. Saturday, Jan. 23, 2016 at Prescott United Methodist Church, 505 W. Gurley St. in Prescott. The family suggests memorials in Jim's name to the PUMC Stephen Ministry Program.