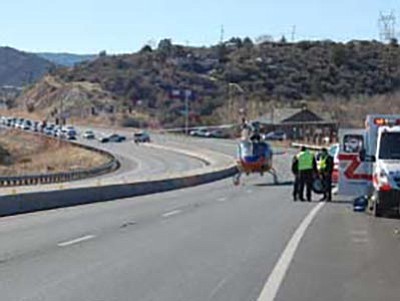 Tim Wiederaenders/The Daily Courier, file<br> The divider down the middle of Highway 69 is visible in this Courier file photo from Dec. 25, 2011, when rescue crews and a helicopter worked a single-vehicle crash. The divider prevented the car from going into oncoming traffic.

The Daily Courier
Originally Published: January 20, 2016 6 a.m.
Tweet
Long before I moved here in the mid-'90s, the section of Highway 69 between Prescott and Prescott Valley was known as "Blood Alley."The Daily Courier has not used that moniker for several years, since the Department of Transportation constructed a divider along much of the two-mile route.Prior to that project, the Courier regularly reported news of the Highway 69 crashes, deaths, injuries, and resulting traffic jams. The deaths practically stopped cold when the road was fully re-opened with a divider in 2011.The death toll over the years - as high as 87 people, depending upon who you ask - included a woman who regularly ran on the highway's shoulder to and from work; a teen on a joyride in the trunk of a car; numerous head-on crash victims; and many involving turns off and onto the roadway. Some people said "it's a bad road," while others blamed inattention or driving habits, such as speeding and tailgating. It is actually all of the above.In recent months more and more attention has turned to Highway 169, which connects Highway 69 (Prescott Valley/Dewey) to Interstate 17 (atop the hill south of Camp Verde/Cottonwood).Deaths and injuries there are mounting. The worst I recall involved people working at the county jail early one morning on the way to work. The accidents, rollovers, collisions and crashes are the result mostly of speed, inattention and a two-lanes, each-way stretch of pavement. As long as people drive 55 mph or faster literally inches away from someone doing the same in the opposite direction, we will continue to have problems.Solutions could include a change in the speed limit, turn lanes, a median, a raised divider or Jersey barrier, and/or increased law enforcement along the road.Yes, Highway 169 is the new "Blood Alley," which means two things: (1.) people will continue to get hurt until (2.) ADOT and/or Yavapai County put in a fix. What will it take before we see action? Until then, slow down and drive safely out there, folks.(Below, you will see a link to work that began this week. Seriously, I'm not sure turn lanes in two spots is enough.)- Tim Wiederaenders, city editorFollow Tim Wiederaenders on Twitter @TWieds_editor. Reach him at 928-445-3333 ext. 2032, twieds@prescottaz.com or 928-420-6472.
Contact
Sign up for Courier e-News Alerts
Most Read
7 days
30 days