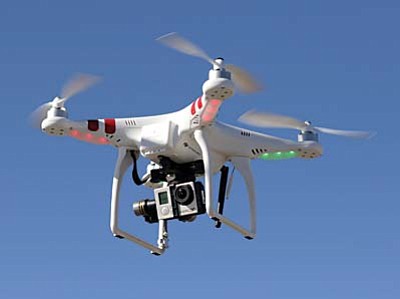 Matt Hinshaw/The Daily Courier<br>Ryan Lowry of Bloom Tree Realty, The Good Life Team's DJI Phantom quadcopter photographs the area with a GoPro while Lowry demonstrates how he uses the quad to photograph homes he is selling Thursday morning in Prescott.

Originally Published: January 20, 2016 6 a.m.
Tweet
CHANDLER - The hottest topic at the 2016 AirCon seminars, held over the weekend of Jan. 15 and hosted by Embry-Riddle Aeronautical University, was UAS, unmanned aerial systems, or as they're known to the general public: drones.That was a result of what people wanted to discuss, said Dr. Brent Bowen, dean of the College of Aviation, who organized the conference."It's a major topic because so many people wanted to do it, wanted to speak about it, wanted to show research," he said, "and it just happened that it became the majority of the program."Packed conference rooms included participants from five countries and 20 universities, Bowen said.James Malecha of the Federal Aviation Administration told one seminar that commercial drone operators are facing stricter regulations, which may be coming by this summer.Malecha addressed those who try to skirt the commercial rules with the example of a woman who was a real estate agent and whose husband flew a camera-equipped quadcopter UAS while she took photos of homes from the ground.That, he said, fell outside the realm of hobby or reactional use and required a commercial waiver.Currently, a person who wants a waiver to operate a UAS for commercial purposes needs to hold a pilot's license, but the FAA is headed toward requiring a specific UAS license. This opens up a range of questions, from whether a UAS license would, like a standard license, require a medical exam (Malecha said it was possible), to whether a pilot with both kinds of licenses would put his regular pilot's license in jeopardy if he violated a rule with a UAS (Malecha, again, said it was possible).He anticipated that such a license would require "a knowledge test, there's going to be stuff like meteorology, regulations, and airspace and several other topics, and you pay your money, pass your test, and get your rating."An audience member asked him about the gray area between people who fly and shoot still images or video for pay and those who "give it away for free."Malecha said the safest way to deal with that issue is to "get yourself a remote-pilot with a small UAS rating certificate" and operate that way instead of having to guess whether the operation is permitted. Currently, the Arizona Legislature is considering a bill that, if approved, would impose new restrictions on where people can operate drones, especially if they are able to take photographs.He also recommended that UAS pilots of all types download the FAA's "B4UFLY" app for their smartphone. The free app gives real-time information as to where flying is allowed and where it is not.As the number of small drones grows, the need for commercial operators to have insurance may grow with them."Right now, there's a southern California assemblyman who is trying to pass a bill to require all (drone) owners ... to have insurance," said Monica England of Aerial Mob, LLC.Nancy Graham, formerly of the International Civil Aviation Organization, said the problem with government regulation currently is that "the market is way out ahead of the rules."Malecha said the rules were still being developed and would change.Follow Scott Orr on Twitter @AZNewsguy. Call him at 928-445-3333 ext. 2038 or 928-642-7705.Mobile users click here for the video
Report a Typo Contact
Sign up for Courier e-News Alerts
Most Read
7 days
30 days