Family stranded in truck after getting stuck in snow near Walker 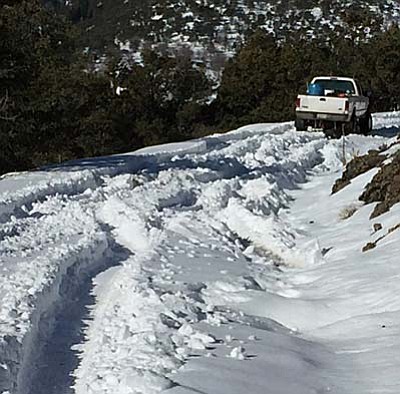 WALKER - A family whose truck became stranded in deep snow in the Prescott National Forest Jan. 14 was rescued the next day by the sheriff's helicopter, a YCSO spokesman said.

The family of four called 911 around 6 p.m., reporting that their truck was stuck in deep snow southeast of Walker, spokesman Dwight D'Evelyn said.

They had been camping and hunting, were out of food and unable to get to a camper in the area.

The Yavapai County Search and Rescue Team's 4x4 Unit responded, but after five hours, several in darkness, crews were unable to reach the family due to the deep snow, D'Evelyn said.

The family spent the night in the truck, and were prepared with warm clothes.

The next morning, the Rescue 1 helicopter brought the family food and water, D'Evelyn said. The helicopter was able to carry the victims out to an area near Lynx Lake.

No one was injured, although the family was cold, tired and hungry.

"The stranded family members were smart to remain stationary with their vehicle through the night instead of 'wilderness wandering' in hopes of finding a way out," D'Evelyn said. "This action reduced risk not only to themselves, but rescue team members also."