Powerball announces winning numbers for record jackpot: Did you win? 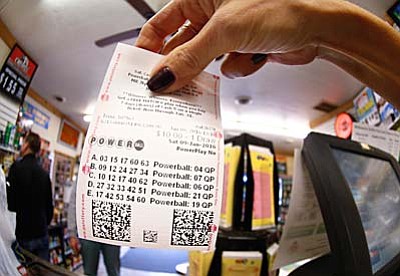 Powerball announced the six winning numbers for a record jackpot of nearly $950 million on Saturday, setting off a scramble among hopeful lottery players across the country to check if they held a lucky ticket.

The winning numbers - disclosed live on television and online - were 32-16-19-57-34 and the Powerball number 13. All six numbers must be correct to win, although the first five can be in any order. Texas state lottery spokeswoman Kelly Cripe said it was too early to know if any winning tickets were sold.

Cripe said the final size of the jackpot was $949.8 million, the largest lottery prize in history. Earlier in the day, the Multi-State Lottery Association had said the jackpot would be $900 million.

The record jackpot lured an unprecedented frenzy of purchases. If no one matches all the numbers on Saturday night, the next drawing is expected to soar to $1.3 billion.

Since Nov. 4, the Powerball jackpot has grown from its $40 million starting point as no one has won the jackpot. Such a huge jackpot was just what officials with the Multi-State Lottery Association, which runs the Powerball game, hoped for last fall when they changed the odds of matching all the Powerball numbers, from about one in 175 million to one in 292.2 million. By making it harder to win a jackpot, the tougher odds made the ever-larger prizes inevitable.

The U.S. saw sales of $277 million on Friday alone and more than $400 million were expected Saturday, according to Gary Grief, the executive director of the Texas Lottery.

The chance of no one hitting all five initial numbers and the Powerball number was growing slimmer, Grief said, anticipating that about 75 percent of all combinations will have been bought.