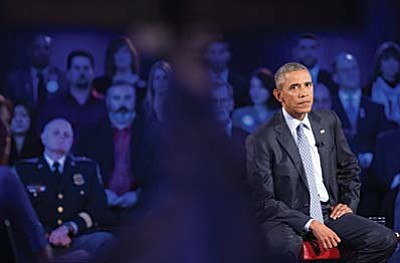 Those measures are seen as crucial to stemming gun suicides - the cause of two-thirds of gun deaths - by blocking immediate access to weapons. But an Associated Press review shows they would have had no impact in keeping weapons from the hands of suspects in several of the deadliest recent mass shootings that have spurred calls for tighter gun control.

Ken Campbell, chief operating officer at Gunsite in Paulden, agreed with that assessment and called the plan "the camel's nose under the tent."

"What he's doing is (only) impacting the average person that's right out here on Willow Creek Road, who wants to go in and buy a gun or carry a gun legally," he said.

"What my fear is, is that orders such as this, in (Obama's) final year as president, will continue to come out, that usurp our rights in the Republic."

Campbell, who spent 35 years in law enforcement - eight as an elected sheriff - worried that the actions' provisions dealing with mental health will keep people who could legally own a firearm from obtaining one.

"Maybe your doctor is not a pro-gun person," he said. "Well, if you come in and say, 'Well, I've just been kind of down here lately,' will he interpret that as you being depressed and put you on the 'no-gun' list?"

Dave McAnally, a gun owner, said he approved of the president's mental health proposal in principle, but "how you draw that line is beyond me. If someone has depression or anxiety, is that a reason not to have a gun?

McAnally said the effects of the executive actions on typical gun owners were murky.

"It's unclear, it's a gesture on Obama's part, to have some meaning to his presidency," after suffering "a number of failures."

The major impact Obama's announcement is likely to have on the average gun owner is likely to deal with transferring guns between people, said Don Grier, owner of Prescott Gun Club.

"I don't know whether law-abiding citizens who may want to transfer a gun to a family member or gift it - whether they're going to be affected by this or not," he said.

But, Grier added, he's skeptical that the majority of what Obama signed into effect will actually help end gun violence.

"If you take a look at the mass killings that have taken place across the United States, I don't think you can find one where the gun was actually purchased at a gun show and used in the mass killing," he said.

Seibert, too, sees the executive actions as a means to "chip away at our Second Amendment rights," which, he said, would serve to only increase distrust of the government among citizens.

Both Grier and Campbell said they would like to have seen Obama put a stronger emphasis on prosecuting gun-related crime under existing laws.

"See how many of their gun arrests were pled down, how many were dismissed - and do that nationwide," he said.

A move toward tougher enforcement of existing gun laws, including incarceration, "would have taken a lot of criminals off the streets," said Grier, and "if they just enforced what's already on the books, I think they'd wipe out a lot of gun crime."