Obama's move may deter some weapon sales over the Internet 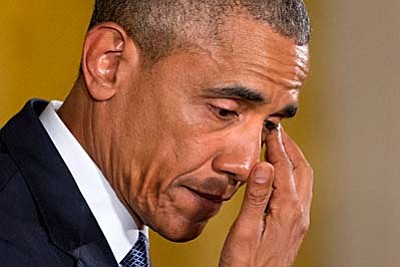 An emotional President Barack Obama pauses to wipe away tears as he recalled the 20 first-graders killed in 2012 at Sandy Hook Elementary School, while speaking in the East Room of the White House in Washington, Tuesday, Jan. 5, 2016, about steps his administration is taking to reduce gun violence. (AP Photo/Jacquelyn Martin)

WASHINGTON (AP) - President Barack Obama's move to tighten controls on gun sales could discourage some unlicensed private sellers from doing business over the Internet and at gun shows. But the White House and others can't say how many transactions it will block or how much bloodshed it may prevent.

"It has potential impact - the degree or the type, it's hard to predict," said University of Pennsylvania professor Susan Sorenson, who studies violence prevention. "And it's really important to acknowledge that we can't just have one change and expect that to change things wildly."

The president used his executive authority to clarify that anyone "in the business" of dealing guns must obtain a federal license and conduct background checks on prospective buyers, regardless of where the selling takes place. Currently, many private sellers do not bother to get licenses, and weapons sales online have become a booming business.

The new controls probably wouldn't have prevented many of the grisly mass shootings around the country that have led to demands for tighter gun laws, and may affect only a tiny fraction of the nation's 30,000 annual gun deaths. Studies in the last decade have shown that criminals are more likely to get guns directly from friends or other social connections than at gun shows or flea markets.

The president also called for the hiring of more than 230 additional examiners and other staff to process the millions of background checks received annually.

Yet even with added manpower, there's no way to completely eliminate human error like the clerical mistake that allowed Dylann Roof, the young man charged in the Charleston, South Carolina, church massacre, to buy a weapon even though he should have been disqualified because of a drug arrest.

The White House did not set a threshold for the number of guns someone has to sell to be covered by the licensing and background check requirement. But it warned that people can be charged with a federal crime punishable by up to five years in prison for selling as few as two firearms when there is evidence they are running a business, such as selling weapons in their original packaging and for a profit.

Theresa O'Rourke of Downers Grove, Illinois, said she hopes Obama's action will deter illegal transactions that have deadly consequences. Her best friend, 36-year-old Jitka Vesel, was killed in 2011 by a stalker who had illegally purchased a gun from a seller he met through Armslist.com, an online gun site. The seller was sentenced to prison after pleading guilty to an illegal sale.

"People do it now because it's easy," O'Rourke said. "But if we say upfront that if you break the law and you are going to go to prison, most people are going to take a step back and say, 'You know what? It's not worth it.'"

She and other gun control advocates said too many individuals make a living from gun sales without obtaining the $150 license and following requirements to conduct background checks, keep detailed sales records and face federal inspections.

Private sales - often carried out in person after Internet advertisements connect sellers and buyers - can be exploited by convicted felons, domestic abusers and others who cannot pass a background check, critics say.

Private sales have increasingly gone online over the last decade, but precise data is hard to pin down. GunBroker.com, which calls itself the world's largest online auction site for firearms and accessories, says it has grown every year since 1999. It now boasts 750,000 active listings on any given day. Armslist claims 7 million site visits per month.

One in 20 guns advertised through Armslist last year was linked to an unlicensed seller who had listed at least 25 guns, according to recent research published by Everytown for Gun Safety, a gun control group backed by former New York Mayor Michael Bloomberg. A 2013 investigation by that group's predecessor, Mayors Against Illegal Guns, found that more than 3 percent of potential buyers on Armslist had criminal records that would bar them from owning firearms.

Armslist, which was founded after Craigslist banned gun ads in 2007, says in a disclaimer on its website that it doesn't get involved in transactions and that buyers and sellers must follow all state and federal gun laws. Still, guns sold through ads on the site have been linked to some fatal shootings.

A lawsuit filed in October alleges that an abusive husband purchased a handgun through an Armslist ad and used it to kill his wife and two other women at a salon in suburban Milwaukee in 2012. The man, Radcliffe Haughton, was able to buy the gun even though a judge had issued a restraining order days earlier that should have made him ineligible. He went online to say he was "looking to buy ASAP," and made the purchase in the parking lot of a McDonald's, the lawsuit says.

Armslist owner Jonathan Gibbon called Obama's moves "well-meaning but ultimately ineffective." He said many private sellers want to conduct background checks but are discouraged by a "costly and burdensome" system that requires them to go to licensed dealers and pay fees.

"Further scrutiny of law-abiding people will not stop criminals," he said.

The Obama administration appeared determined to tamp down expectations, with Obama saying he realizes his actions won't stop all gun violence.

"Obviously the president is not able to take strong measures because that's going to require Congress to act," said Philip Cook, a Duke University professor. "But if he is able to disrupt a relative handful of sales and save a handful of lives, that may well be worthwhile."

He added: "What we're looking at here is a low-cost intervention with the possibility of some payoff."