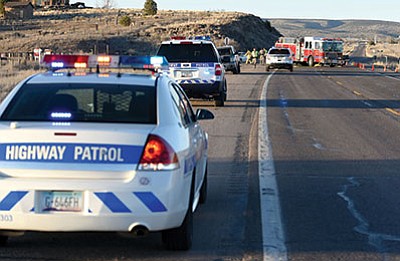 Officials say an inattentive driver was most likely the cause of a three-vehicle, fatal car crash Thursday in Paulden. (Matt Hinshaw/PNI)<br /><br /><!-- 1upcrlf2 -->

A three-vehicle collision on Highway 89 at 5 p.m. Thursday, Feb. 25, resulted in one victim's death and minor injuries to another, according a spokesman from the Department of Public Safety.

Salvador A. Estrada, 21, was killed when the vehicle he was driving struck a second vehicle that was waiting to make a left turn.

The driver of the vehicle that was struck was taken to Yavapai Regional Medical Center, treated and released.

A third vehicle, headed the opposite direction, was sideswiped. Neither person in that vehicle was injured.

"Alcohol or drug impairment do not appear to be a factor, but (the cause was) most likely inattention by the deceased driver," said DPS Capt. G R. Manera. "There are no criminal charges pending on this investigation."