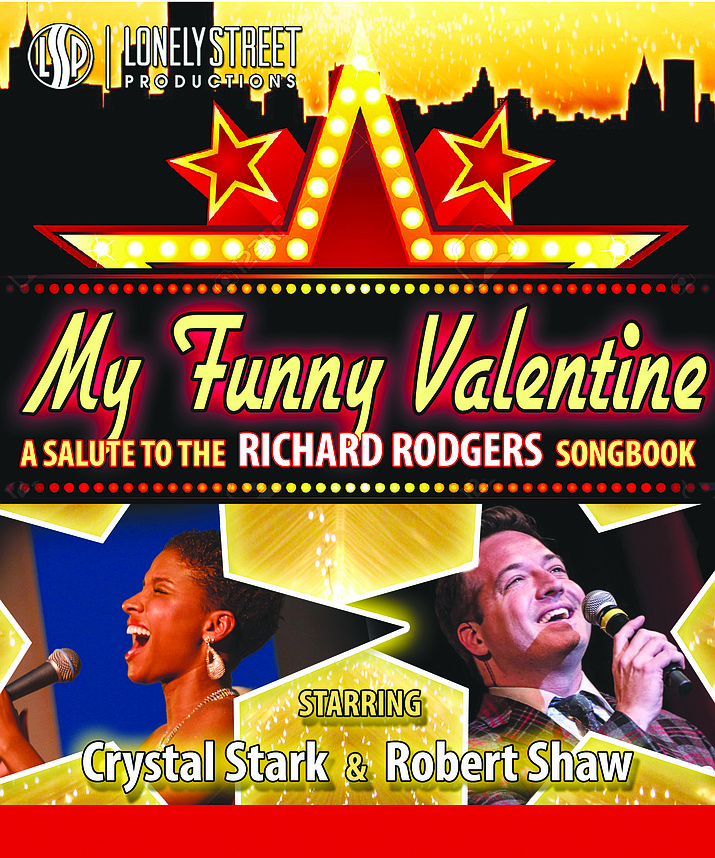 The Elks Theatre and Performing Arts Center celebrates its 111th anniversary at 7 p.m. Friday, Feb. 19, with “My Funny Valentine,” a salute to the Richard Rodgers Songbook, featuring Robert Shaw and Crystal Stark.

The Elks Theatre and Performing Arts Center, 117 E. Gurley St., celebrates its 111th anniversary at 7 p.m. Friday, Feb. 19, the night of Lonely Street Productions' "My Funny Valentine," a salute to the Richard Rodgers Songbook featuring Robert Shaw and Crystal Stark. During intermission, the annual service award will be given to Ann Carson Dater for her contributions in acquiring the Knights of Pythias building, creating the 'Tis Art Center and Gallery as well as making the Elks building available to the public for meetings and gatherings in addition to the use of the theater.

Lonely Street Productions has enjoyed its partnership with the theater, and to play a role in celebrating its 111th anniversary is fantastic, Shaw said. The night will be filled with history as the show itself is historical, with music dating back to the 1920s, Stark said.

"It's definitely an honor to be there for such a momentous landmark occasion," Stark said.

Tickets are $25 for adults, $22 for seniors and $30 for opera box seats and are available online at www.prescottelkstheater.com, by calling 928-777-1370 or at the door one hour before the performance.

Stark and Shaw have distinct favorites about the songs the two of them are singing. For the former, it's "My Romance," because of the melody. Stark also enjoys "I Enjoy Being a Girl" as well as the ballads. On the other hand, Shaw has been having a lot of fun with "Johnny One Note."

Rodgers' skillful and beautiful melodies are definitely among Shaw's top three favorites. Rodgers has put notes together and crafted a unique sound that gets in your head and soul, Shaw said. What's more is, it's nice to have a chance to perform songs that aren't normally requested, Stark said. Not very many people come up and ask for a rendition of "Oh, What a Beautiful Mornin'," she said.

"These songs were written when the art of singing was still cherished and you just feel that as you're singing," Stark said. "You can hear it in the music and the depth of the songwriting and the lyrics are just breathtaking at times and I really enjoy being a part of that."

The Elks Theatre and Performing Art Center is Stark's favorite venue to perform in during tours. She enjoys its history as well as its historic charm and the box seating right at the front, Stark said. She always feels like she can reach out and grab an audience member and has done so in the past.

People are going to come to the show for a variety of reasons, Shaw said.

"You've got people who are going to be drawn to the music, they're familiar with Richard Rodgers in some way, shape or form," he said. "You're going to have people who are just music fans in general that are going to really enjoy it. We have some of the best musicians in the western hemisphere."