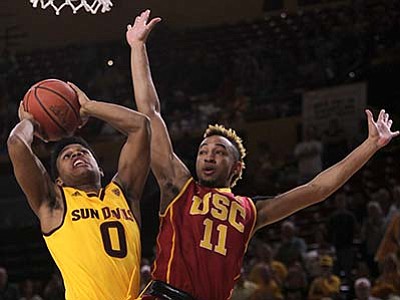 Nikola Jovanovic had 25 points and 15 rebounds for the Trojans (18-6, 8-4 Pac-12), who would have been within a half-game of first-place Oregon in the Pac-12 with a victory. Gerry Blakes added 14 for Arizona State.

"This one was big for us and it's a pivotal moment in our season," Holder said. "We were going after it. We were hungry and we did what it takes to win."

The Sun Devils have won two conference games in a row for the first time this season, holding USC 18 points below its average in conference play.

"I thought our defense was unbelievable throughout the entire game," Arizona State coach Bobby Hurley said. "The way we guarded the 3-point line, and forced some turnovers, our activity was really good, and to hold them to 67 is a challenge because they can really score and they have a lot of talent out there on the court. "

Arizona State took the lead with a 10-2 run to start the second half and never trailed again.

Blakes and Holder sank 3s in what turned out to be a decisive surge.

Both teams had their struggles. USC committed 17 turnovers, seven by Jacobs.

The Trojans controlled most of the first half, when they shot 58 percent to the Sun Devils' 33 percent in the first 20 minutes,

A six-point spurt put the Trojans up 16-11 in the early minutes, but neither team led by more than five points in the first half.

Arizona State cut the lead to one point twice and trailed the Trojans 30-27 at the half.

But the second half was a different story. The difference in the game, Holder said, "was our activity level, our deflections, guys coming off the bench with big energy, getting down there, banging with those guys and making it hard for them. We just didn't want them to be comfortable."

USC: Entering the game, all five starters averaged between 12.2 and 12.6 points per game. ... Trojans lost at Arizona State for the eighth time in nine tries.

Arizona State: Arizona State outrebounded the Trojans on the offensive boards 16-9. ... Entering the game, Sun Devils average 76 points per game, highest since the 2002-2003.