Column: All hail the Gila Monster 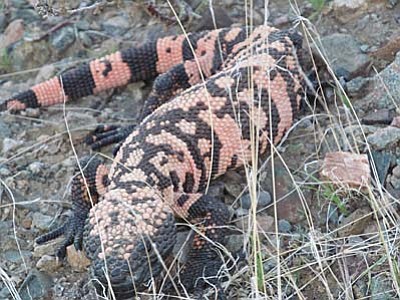 About this time last year, my husband, brother and I were on our way to the historic Cleator Bar & Yacht Club when we chanced to see a real live Gila Monster. He was hanging out alongside the road, minding his own business. My brother Mike, who has spent much more time in Arizona than me, commented that even he had never seen a Gila Monster in person. So we stopped and immediately piled out for a better look.

Mr. Gila Monster, who was not expecting company, took one look at us and scrambled up an embankment for his front door, a hole located on the outskirts of a bush. "That's it," I thought, until he suddenly turned around with a "Hey wait a minute, this is my turf" attitude. Taking a stand-off position, ol' Gila next made it clear that nobody, not even us gangly creatures on two legs, was going to invade his space.

As I took in the lizard's vivid colors, flat head and fat little body, I thought of a story my neighbor in Mayer, Margarita, once told me. Margarita has been on many an adventure, and this one story took place when she was only six or seven years old. The family had been hiking in the hills somewhere here in Arizona. At the end of the day, Margarita was stepping over some rocks on her way to the car when her father said, "Watch out, you're stepping on that lizard!" Margarita, who is a little lady and was probably very light, looked down. Sure enough, she saw a colorful Gila Monster trapped under her shoe. "He was waving his arms around," she remembered, waving her own arms around to illustrate his plight. "I thought he was hurt for sure." Margarita was worried about the lizard, so her dad actually picked it up, put it in a box, and took it home. There, it presumably led a happy life, since Margarita talked fondly of keeping it as a pet.

Back to our Gila Monster on the Cleator road, which I was beginning to like. I didn't dare touch him, but I did manage to get some nice pictures of him. Later, I also found a cool vintage postcard of a Gila Monster laying around in the family archives. This inspired me further to look these odd lizards up and find out more about them. They seem to have first popped up some eight to ten thousand years ago near Las Vegas, Nevada. There, they must have done well by betting on the Broncos (then known as the Broncosauruses) to win the Superbowl, for they are now common in both Arizona and New Mexico.

It is true that Gila Monsters are venomous, but are so slow on the go that the chances of being bit by one are slim. On the down side, the lizards are so scary looking that they are often killed just on the basis that one might find a way to wriggle up your pant leg and bite you before you have time to stop teasing it and leave it alone. It should be noted that the Gila Monster's population is currently decreasing and reaching "near threatened" status.

One other interesting note about the Gila Monster: their saliva is being researched for use in a drug to help Type II Diabetes, as well as memory loss in patients with Alzeimer's, ADHD and Schizophrenia. So if you are ever lucky enough to see a Gila Monster in the wild, say hello, be polite, and thank it for offering up it's spit for the good of mankind. You will be glad you did.