Hope & Honor: A look at the plight of Prescott's homeless veterans 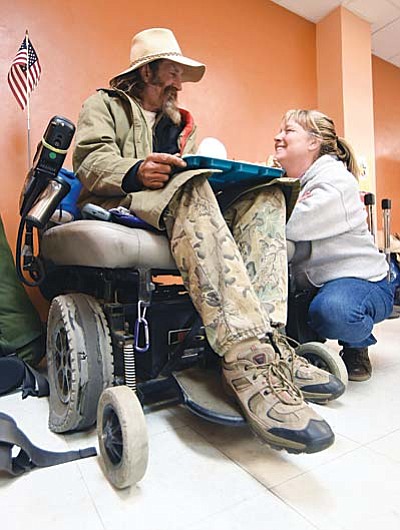 Homelessness in America is seen by many as a societal black eye, particularly when those without the means to find safe, sanitary shelter once wore this nation's uniform.

On any given night, more than half a million people are homeless, whether that means they are asleep on a park bench, on a friend's couch or in an emergency shelter somewhere, according to the National Coalition to End Homelessness.

In Arizona, over 10,500 men, women and children are homeless; 41 percent of them are veterans.

On one night in January 2015 in Yavapai County, the federal Department of Housing and Urban Development Point-In-Time count performed by local charitable agency leaders and volunteers recorded 141 unsheltered homeless individuals, or 103 households - 54 percent being in either Prescott or Prescott Valley.

The count also included some 271 veterans and non-veterans participating in various shelter, transitional and permanent housing programs across the county.

For local veteran and community social service leaders, the statistics are disturbing not just in volume but because they represent real people who they believe deserve more.

"Some people may fear they're a menace or that it's their own fault," she said.

Yet when people learn their stories, and see how hard they have struggled, be it with addictions, mental illness or elusive job searches, Biasetti said she believes they may not be so quick to pass judgment.

"I know our clients' stories. They became homeless because of a series of circumstances, and every time they tried to get out, they didn't succeed," Biasetti said of life struggles that erode one's mental health. "I'm sure they never wanted to be here, either."

Social service agency leaders know that given the chance - 91 percent of homeless surveyed across the state expressed a desire for affordable housing - each would prefer a place of their own to living in a constant state of fear for their safety, their health, and their dignity. They, too, suggest a community is only as rich as it treats its poor.

One of the larger non-profit agencies that offers services to the homeless and impoverished of the region, the Coalition for Compassion and Justice, reported serving 587 individuals in 2014.

"As a whole society, I think we could stand to be more compassionate," Biasetti said. "I think compassion is the answer."