Should plastic bag use be a choice? 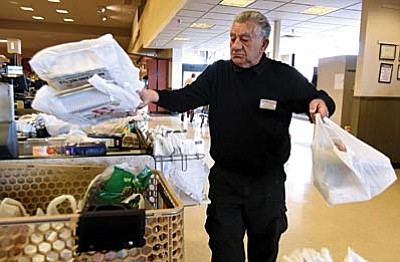 Milenko Rafilovich loads plastic bags full of a customers groceries into their cart at Safeway on Willow Creek Road in Prescott.

State lawmakers are attempting to firm up a law passed last year prohibiting cities and counties from regulating or banning plastic bags.

The law, signed by Gov. Doug Ducey, has since been under legal challenge because it included a separate prohibition against local governments forcing building owners to conduct "energy audits" and report on their power use. This allowed opponents of the legislation to charge that the statute violates constitutional requirements that all laws concern only a single subject.

To overcome this challenge, proponent of the law Rep. Warren Petersen, R-Gilbert, simply took the legislation and broke it into two measures that accomplish the same ends.

The plastic bag measure, HB 2131, and the energy audit ban, HB 2130, have both cleared the House Commerce Committee and now need approval of the full House. The vote was scheduled for Thursday, but was delayed.

However, the lawsuit filed by Tempe city council member Lauren Kuby may not just disappear because of this correction.

Kuby affirms that Tempe and 17 other cities throughout the state (including Prescott) have their own charters, thus giving their governing bodies the right to enact laws of local concern no matter what state laws say.

In other words, Kuby and her attorney believe that such laws are unenforceable in such cities.

This matter has yet to be resolved by the Maricopa County Superior Court system.

Before Ducey signed the original measure in April 2015, several of those charter cities had been making strides toward restricting plastic bag use.

Tucson had mandated a plastic-bag recycling program, Tempe and Flagstaff were working toward passing their own measures to restrict the single-use of plastic bags, and Bisbee had outright banned them.

Michael Byrd, executive director of the local nonprofit environmental group Prescott Creeks, said his organization likes to remain apolitical, but can vouch for plastic bags being a significant source of litter in the community.

"We definitely see that plastic bags are a trash issue in this community," Byrd said. "We see them almost everywhere we go."

He described a scene he and the organization's volunteers often lament while caring for the health and beauty of the area's creeks and lakes.

"We'll see plastic bags that are stuck in cottonwoods just out of our reach, like white flags flying in this very natural area," Byrd said.

Although Prescott has not made any moves toward banning plastic bags or regulating their use in any way, many businesses already either provide recycling options or encourage the use of alternatives.

Stores such as Safeway, Fry's, Sprouts and Wal-Mart all provide plastic bag recycling bins near their entrances. These black bins are part of a statewide effort called Bag Central Station, which is coordinated by the Arizona Food Marketing Alliance (AFMA).

All of the bags that go into these bins are brought to recycling centers to be broken down and reused.

Some smaller stores take it a step further.

Natural Grocers, for example, doesn't offer plastic bags at all. Instead, if someone doesn't already have a re-usable bag to carry groceries in, the clerks will offer to package one's groceries in boxes they collect from shipments of goods the store receives.

The store also sells many types of reusable bags - some for only 75 cents or $1 - and donates five cents to a local food bank every time a customer uses one.

Judith Hopkins shops for her groceries at four different stores and will often bring a re-usable bag.

When she does get a few plastic or paper bags from a store, she likes to reuse them at her home.

"I put trash in them," Hopkins said.

Shirley Espe, on the other hand, thinks plastic bags should be banned completely because they aren't biodegradable.

"It wouldn't bother me at all if they did away with plastic bags," Espe said.

Paper or plastic? ... or neither
Judge: City must have law regulating plastic bags before challenging state ban
Companies fight plastic use despite state’s reluctance to do so
Wiederaenders: Trash will exist as long as lazy slobs live among us
Fry's to phase out plastic bags at all its grocery stores over 7 years