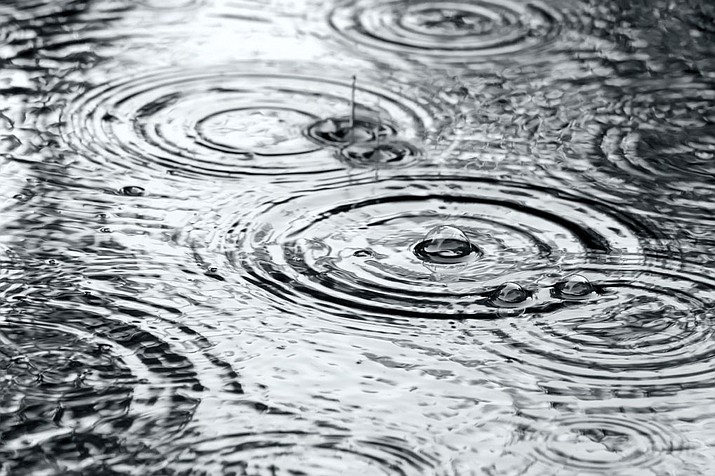 Rain is expected in our area for most of the weekend.

PRESCOTT — The National Weather Service is forecasting “significant snow” late Saturday and Sunday, New Year’s Day, throughout much of northern Arizona, but the Prescott area will likely see only rain throughout the weekend.

The heaviest concentration is expected to fall around and to the east of Flagstaff, along the Mogollon Rim and into the White Mountains with four to eight inches of snow falling near the New Mexico state line at about 9,000 feet elevation.

NWS is predicting winter driving conditions at higher elevations Saturday, and snow will fall at progressively lower elevations over the weekend, but meteorologist Dave Byers said the snow level would likely drop no lower than 6,300 feet by Sunday afternoon, so “we’re expecting just rain for Prescott.”

For tonight’s Boot Drop, the NWS is predicting damp, cool weather with some rain showers.

Traveling to the High Country this weekend?

The Arizona Department of Transportation has nearly 200 snowplows and 400 certified drivers stationed around the state to deal with snow and ice, according to an ADOT news release.

“But as Christmas weekend showed, especially on Interstate 40 from Flagstaff west to Ash Fork and on Interstate 17 south of Flagstaff, a snowstorm can be so intense that travel becomes unsafe quickly,” the release stated. For those reasons, ADOT cautions drivers to monitor conditions before leaving and be prepared to delay travel until snowplows can do their work. It added that with another storm forecast for New Year’s weekend, “recent experience reinforces the value of waiting until roads are plowed and ready for traffic. If there’s any question about whether it’s a good idea to go, you’d probably do well to wait.” Because snowstorms can result in sudden closures sometimes lasting for hours, ADOT offers tips at azdot.gov/KnowSnow that include packing an emergency kit with blankets, warm clothing, snacks and water, having a charged cellphone and keeping your gas tank half to three-quarters full at all times. But the safest option when snow is falling, ADOT says, is not being on road unless it’s absolutely necessary.

In addition to forecasts at http://www.weathe..., information is available at az511.gov or by calling 511 for the latest road conditions. ADOT’s Twitter account (@ArizonaDOT) also is a good source of information and interaction.

When highways are plowed and ready for traffic, many drivers may be heading uphill to play in the snow. “If you’re among them, be sure to leave prepared, as New Year’s usually is an especially busy weekend at snow-play areas, especially along US 180 outside of Flagstaff, resulting in long lines of traffic at day’s end,” stated the ADOT release.

ADOT also suggests that those heading to snow-play sites along US 180 may want to consider making an earlier start home, because on busy days traffic builds toward Flagstaff throughout the afternoon. When they reach Flagstaff, drivers taking Interstate 17 south can save time by following a marked alternate route to Interstate 40 at Butler Avenue, via Switzer Canyon Road and Route 66, and then heading west to I-17. A map of this route, as well as locations of snow-play sites, is available at FlagstaffArizona.org (follow the Winter Snow Play link).

Travelers also are urged to resist the temptation to stop on highway shoulders to play in the snow, in part because plows throw snow and ice far from the roadway. In addition, other drivers may be distracted by their vehicle, and first responders may need to use the shoulder. “Exit highways and park in designated areas,” ADOT suggests.

Winter storm system to bring snow, rain to Arizona
ADOT: Winter storm to create ‘difficult to impossible’ driving in high country
Prepare for next storm, traffic if heading to play in the snow Sunday
ADOT: Winter storm forecast to create difficult driving conditions this week
Be ready to wait out snowfall, get prepared
Event Calendar