'Calendar Girls' among many events ahead at Prescott Center for the Arts, Elks Theatre 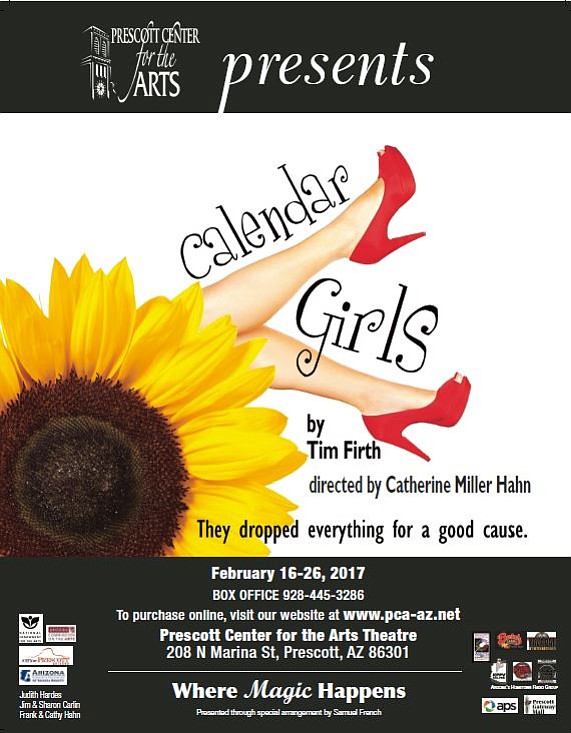 PRESCOTT – With this year’s performance season at the halfway point, it’s time to look at what’s coming up in 2017.

Prescott Center for the Arts Mainstage

PCA has four shows upcoming on the Mainstage:

• “Charley’s Aunt,” directed by Rob White, tells the story of Charley’s millionaire aunt, invited to visit from Brazil to the UK for a dinner party. When she cancels at the last minute, a man is recruited to fill in for her. Runs Jan. 1 to Jan. 22.

• “Calendar Girls,” directed by Catherine Miller Hahn. Based on the true story of a group of older women who posed nude for a calendar to raise money for leukemia research. Runs Feb. 16 to 26.

• “How to Succeed in Business without Really Trying,” directed by Bruce Lanning. A musical send-up of the business world. Runs March 23 to April 9.

• “Alice in Wonderland, Jr.” is a Family Theatre presentation directed by Deb White. This trip down the rabbit hole is intended for the whole family. Runs April 27 to May 7.

• The season wraps up with Noises Off, directed by Don Langford. This goofy show-within-a-show chronicles the collapse of a theater company as it performs a play. Runs June 8 to 18.

• “Love Happens,” directed by Kevin Nissen, is a romantic comedy that follows the relationships of two couples, one young and just starting out, the other older and married for 50 years. Runs Jan. 26, 27, and 28.

• “Men Are Dogs,” directed by Parker Anderson, tells the story of a therapist, who, despite problems of her own, holds group sessions for single and divorced women. Runs March 2, 3 and 4.

• “The Naked Truth,” directed by Ron White. A comedy about a Midwestern couple who inherent a clothing-optional resort and all the baggage that comes with it. Runs April 6 to 23.

• “American Buffalo,” directed by Paul Epoch, is a David Mamet play about con men who really want to rip off a valuable coin. Runs May 11 to 28.

The Elks has a packed schedule for 2017 already. Here are a few early-season highlights:

• Saturday Night Fever, a tribute to the Bee Gees. Jan 6.

• What a Night: The Jersey Boys Meets Mamma Mia is a tribute to both shows, imagining supergroup Abba performing with the Jersey Boys. March 31.

More info on Elks shows is available at www.prescottelkstheater.com or 928-777-1370