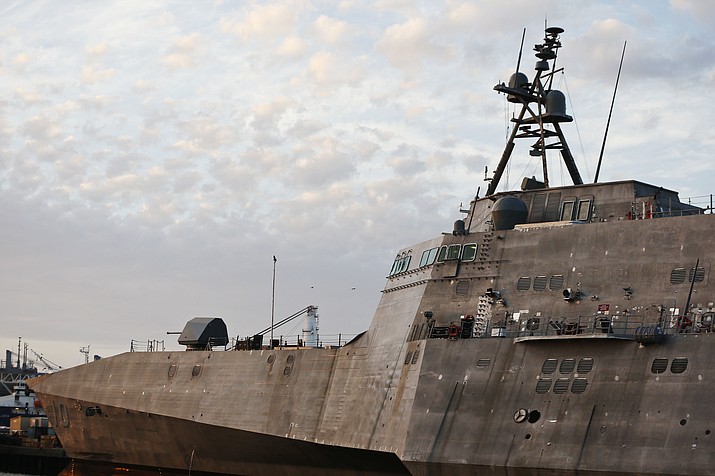 In this Wednesday, Nov. 30, 2016, photo, the USS Gabrielle Giffords, a Naval littoral combat ship built at the Austal USA shipyards, docked on the Mobile River in Mobile, Ala. The ship is named in honor of former U.S. Rep. Gabrielle "Gabby" Giffords of Arizona. Giffords, the former Arizona congresswoman who was shot in the head during an assassination attempt in 2011, helped christen the ship in 2015. It's part of a hotly debated program that congressional critics slam as flawed and too expensive but that Navy leaders defend as a critical new step in naval warfighting.

MOBILE, Ala. (AP) — A naval program that has become a target for critics is preparing to commission the USS Gabrielle Giffords, named for the U.S. politician who survived an assassination attempt in 2011.

The USS Gabrielle Giffords, constructed by Austal USA in Mobile, Alabama, has completed testing in the Gulf of Mexico and is scheduled to be commissioned in mid-2017. The company handed over the $475 million ship to the Navy on Friday.

Giffords was shot in the head during a mass shooting in Arizona in 2011 and helped christen the ship in 2015. It's part of a hotly debated program that congressional critics slam as flawed and too expensive but that Navy leaders defend as a critical new step in naval warfighting.

The 421-foot-long Giffords will be the ninth in a series of high-speed vessels designed to navigate in shallow coastal regions known as littoral waters. Sen. John McCain, R-Ariz., has cited the $12.4 billion spent for 26 littoral combat ships as the worst example of wasteful Pentagon spending.

The ship's name also has been a target for conservatives who see it as promoting stricter gun laws, a cause Giffords has promoted. Some critics lampooned the ship as being gun-free, a bit of parody and fake news that was debunked on snopes.com.

The Navy said it chose to name the ship in honor of Giffords because of the perseverance she showed after the shooting.

Constructed from aluminum and featuring a distinctive trimaran design, the Giffords is armed with missiles, machine guns and fast-firing weapons designed to hit a variety of targets. Its normal crew of 40 sailors and officers can be supplemented as needed for missions.

A sister ship of the Giffords, the USS Montgomery, sustained hull damage in October while navigating the Panama Canal. The same ship was damaged in a collision with a tugboat weeks before.

USS Gabrielle Giffords now commissioned
Days Past: The USS Arizona and the Prescott Connection: Part II
USS Arizona: The vessel and the vassal who christened her
Days Past: A pretty girl and a prayer for the USS Arizona
Navy is considering how to dispose of first nuclear carrier
Event Calendar