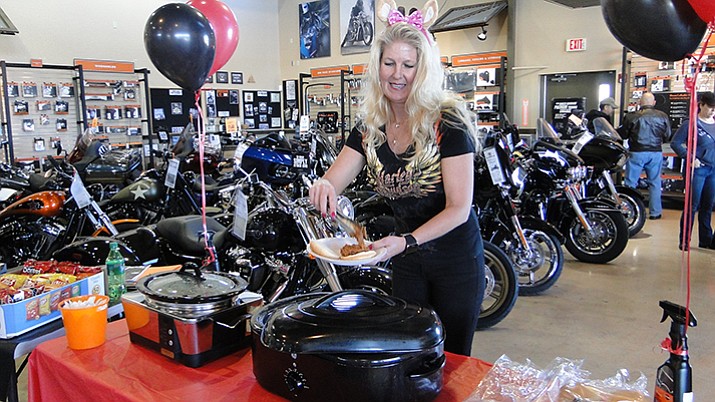 It seems that Mayer’s Grand Canyon Harley Davidson is doing something for the community all the time. Today was Customer Christmas Appreciation Day, where lunch was provided from noon to 3 p.m. And it was a great lunch of pulled pork sandwich, baked beans, chips and a cookie. Drawings were done throughout the day with Carol Kennedy being the first winner of a picture frame.

This store is one of four in the Grand Canyon group and is very popular with the local people, probably due to the efforts of Christina Anderson, the Marketing Coordinator. While the store has been there about 15 years, she has only been on the job about a year. But her influence is showing as more and more events are hosted there.

If you ever wonder what the events are, check out the web site GCH-D.com to see what’s coming up next. They have just done an Angel Ride where they went into Prescott and riders each took an angel from the tree and fulfilled the wishes of that person, where over 30 angel’s wishes were granted. Last June they hosted Veteran’s Appreciation and arranged for the Native American Warrior’s medal to be presented to those that were qualified, but had not yet received it. Watch for the next Veteran’s Appreciation, tentatively scheduled for May 13th – check the web site.

They have something happening almost every week, with group rides starting from any of the four major locations. They have clothing sales, group rides, appreciation days, and much more happening for the community, not just the motorcycle people. So drop by and say hello, and watch for their next event.