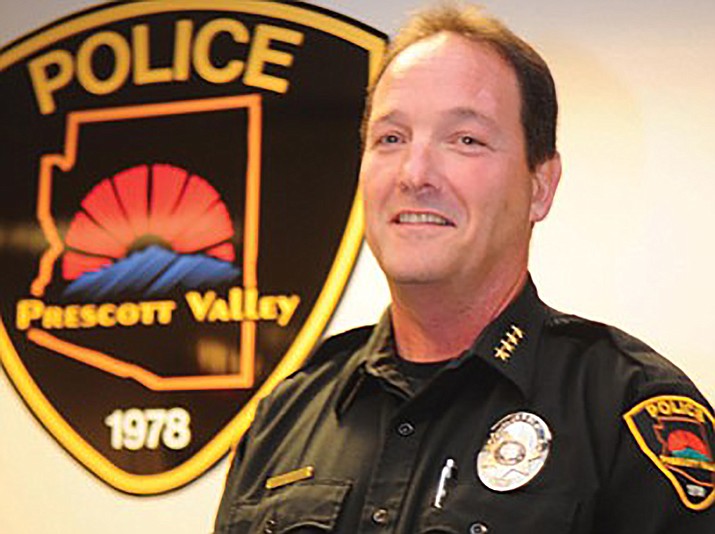 Prescott Valley Police Chief Bryan Jarrell has come under fire for his comments about next week’s election.

Saying the community should have trust and confidence in their chief of police, Prescott Valley Police Chief Bryan Jarrell told the Town Council at its Dec. 13 meeting that the state attorney general office had concluded their investigation into his comments prior to the town council election.

“They have determined that none of the allegations could be substantiated and they have closed the inquiry on the matter,” he said.

Former Town Councilmember Stephen Marshall publicly accused Jarrell of breaking the law regarding the comments he made weeks before the council’s primary election, calling for the chief to be fired, and reiterated his statement in his letter of resignation in November.

It’s easy for people to cast unsupported accusations, Jarrell said, noting that it’s dangerous and hurtful when they are made in a public forum.

“Public statements should be made regarding matter of public concern, but they should be grounded in facts, not baseless rhetoric or political posturing,” he said, stating that those accusations were hurtful to his family, his department and himself. “I agree with the former councilmember that the community should have trust and confidence in their chief of police. To that end, I come before the public this evening to announce that the Arizona attorney general has concluded their investigation.”

The attorney general determined that none of the allegations could be substantiated and thus closed the inquiry, Jarrell said, later commenting that he himself is happy to have the matter behind him.

Jarrell said he remains committed to his job in making sure that the people in the Town of Prescott Valley are safe and that he will continue to do everything in his power to make sure the town is one of the best places to live and raise a family.

Jarrell said he stood by the statements he made in The Daily Courier that prompted Marshall to make his initial accusations, remarking that when he hears people talking about budget cuts it concerns him because he has the largest budget in the Town of Prescott Valley. The comments were specifically about the half-cent sales tax increase that took effect on Jan. 1, 2016. That money was promised to go to the police department and improving roads.

“My statement was that if budget cuts were made to my police department, I’d have to lay off 12 people,” he said. Eight of those people would have been sworn officers, Jarrell said.

Jarrell called some of the views of candidates dangerous, but he did not name which candidates in the story. He did call out one candidate, Joey Cilano, for telling a “blatant lie” on his claim that Prescott Valley pays the third highest tax rate in the state.

Cilano said his position was that the town could find a way to maintain its police force by making cuts to other departments, rather than increase the sales tax.

Jarrell said he harbors no ill will towards Marshall whatsoever, bringing up how a thick skin is required to do the job he has had for 32 years.

There will be misunderstandings and misgivings and it does hurt when it’s made personal, but he’s never done anything for people to question his integrity and honesty, Jarrell said.