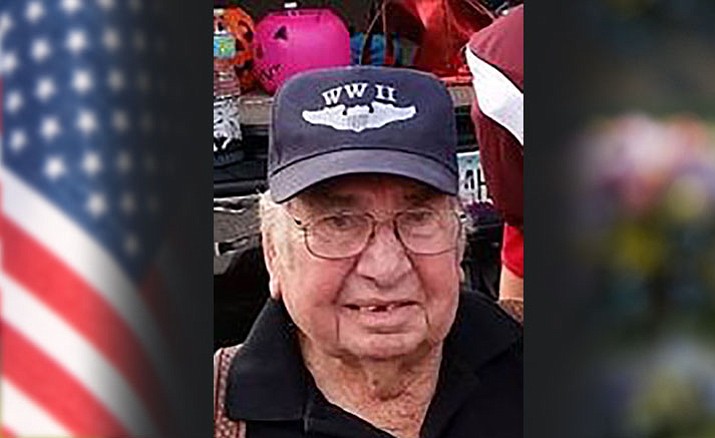 Frank was born in Pasadena, California, he moved to Phoenix with his father Salvatore in 1938. Soon after he was joined by his mother Concetta, sisters Terry, Lu and brother Geno.

He was called to serve his country in 1941 in the Army Air Corp as a B-26 pilot. He returned as a proud WWII veteran in 1945. He met the love of his life Wanita and they married in 1945. They settled in Sunnyslope where they started their family. During this time he worked with his father in the window washing and commercial cleaning business. In 1953 he started a very successful stone company, Melluzzo Stone Co. Much of his stone is still seen on many homes and buildings in Phoenix. His family was always his first priority and he enjoyed spending his time with them at their summer home, which he built in the Prescott Mountain Club. In the late 1950’s he was introduced to Cherry, Arizona with an interest in mineral mining. He continued his love of building with Wanita always by his side, they built the “cabin”. As the family grew so did the “cabin” it became the focal point for family gatherings, which included many parties and Cherry get together.

A man like Frank is very difficult to eulogize, he was such a dedicated and giving person.

Those who were fortunate enough to know him will always remember his kindness, generosity and sincerity. He acquired so many lifelong friendships through his association in the Phoenix Jaycees, Prescott Valley Kiwanis Club, Sunnyslope Historical Society, Safari Club International and many others.

We will always miss our Dads stories and laughter. We know we will have his generous heart and unconditional love within us always. He is preceded in death by his wife Wanita and grandson Robby. Survived by his children Wayne (Mary), Gloria (Logan), Kay (Dennis). Grandchildren Suzanne, Stacy, Lindsie, Lacey, Melissa. Great grandchildren Shelby, Chole, Robbie, Drew, Jake, Maigan, Finley, Reese, Jack, Zack, Alyson, Karly, Kyle.