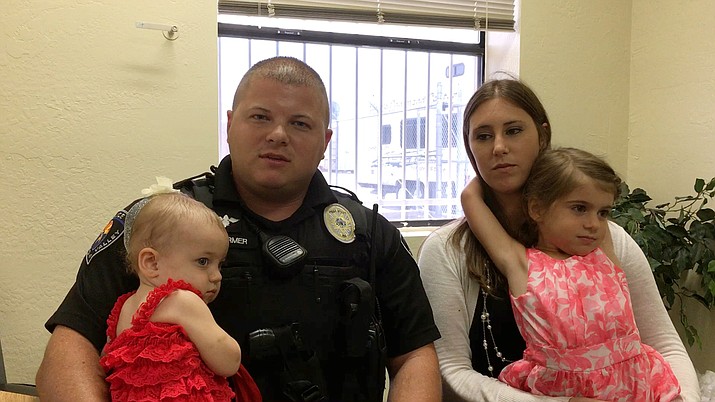 The family of Chino Valley Police Officer Stephen Farmer. His 1-year-old daughter, Gabrielle, is back in the hospital and will likely be there for months.

In October Chino Valley residents turned out in force to support two Chino Valley Police Department officers whose daughters needed treatment in the hospital. At the time it was hoped that the two girls were past their medical issues and the prognosis was good.

That turned out not to be the case. One of the girls, Officer Todd Hyslip’s daughter Harper, is doing well. Gabrielle Farmer, however, is back in Phoenix Children’s Hospital.

“We asked if she’ll be able to go home by Christmas, they told us she’ll be lucky to be home by Easter,” Officer Stephen Farmer said.

On Sunday, Dec. 4 Farmer said he and his wife Stephanie started to notice that Gabrielle was having problems very similar to what happened last summer, when she had to have emergency surgery to remove 60 percent of her colon and 4 percent of her small intestines.

Farmer said they took Gabrielle to a Prescott Valley hospital, but were told she was only constipated. They took their daughter home, and she vomited 10 more times that night.

On Monday, Dec. 5, they decided to take her back to Phoenix Children’s Hospital where she had her surgery performed, Farmer said. They also said Gabrielle was constipated and gave them some anti-nausea medicine to administer to their daughter.

On Wednesday, Dec. 7, Gabrielle’s condition declined, Farmer said. They took her back to Phoenix Children’s Hospital where nurses began examining her.

“The nurses started panicking, they said she was coding [refers to Code Blue, a critical life event],” Farmer said. “They took her to the trauma emergency room.”

Doctors were able to deal with that cardiac arrest event.

Farmer said there was scar tissue from the last operation and some blood vessels had formed around that, restricting the blood flow to her lower intestines. Doctors have removed an additional 82 centimeters of her colon because it died from lack of blood flow.

“It started Sunday, and that’s why she was acting that way,” Farmer said. “This is kind of frustrating, if this had been taken care of Sunday, she wouldn’t have lost as much colon as she did. My wife is a wreck, it’s tough.”

One of the challenges of caring for a child who is in a Phoenix hospital is the Farmers also have a 4-year-old daughter.

“Baby Hylsip to our knowledge has had no additional issues and continues to grow and have a happy life,” Schaan said.

Schaan said the focus now is on the Farmer family.

“Spending four or five months at the hospital is going to be draining to the young family,” Schaan said.