Council approves Fourth of July contract, with some changes 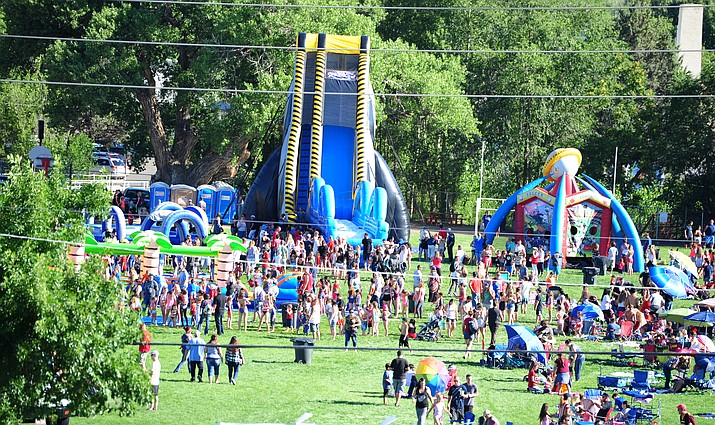 Inflatables, food and live music were central to the 2016 Fourth of July festivities on the Prescott Mile High football field in downtown Prescott.

PRESCOTT – The City of Prescott will go with the same event planner and the same venue for next year’s July 4 celebration as it used in 2016 – albeit with some new requirements.

In a unanimous vote on Tuesday, Dec. 13, the Prescott City Council agreed that the city’s Recreation Services Department should enter negotiations with Eagle Management and Event, LLC, to plan and implement the community’s Fourth of July celebration next summer.

That means that the Tuesday, July 4, 2017, community celebration will take place in downtown Prescott again, as it did this year, and will use the nearby Prescott Mile High Middle School football field as the celebration area.

In addition, the event will once again use the top level of the Granite Street parking garage as the staging area for the fireworks display.

But, according to Recreation Services Director Joe Baynes, the contract will call for some changes to deal with issues that arose after the 2016 event.

For instance, he said the fireworks display would be longer next year – increasing from 16 minutes to 22 minutes. A new fireworks company (Southwest Fireworks) will handle the display, Baynes added, and small mortars will be used, along with the basin/proximity and cake-style fireworks used this year.

And, in response to complaints that the 2016 display did not include a noticeable finale, the contract will require “a distinct opening and closing.”

Although the city sent out requests for proposals (RFPs) to 19 event promotion companies, Baynes told the City Council that Eagle Management, which also handled the 2016 Fourth of July event, was the only company to submit a proposal.

The 2016 celebration was the first to take place in downtown Prescott, after more than a decade of having the event take place at Pioneer Park in northeast Prescott.

For years, the city had paid for the celebration and had a special events manager on staff to plan and implement it. But in January 2016, that position was eliminated in a round of city budget cuts. Officials agreed at the time that the city should solicit private companies interested in conducting the July 4 event. An RFP process in early 2016 resulted in Eagle Management being chosen to conduct the celebration.

Along with the savings, Baynes said the change in venue also brought more foot-traffic to the downtown area on July 4, 2016, which helped to increase business at downtown establishments on a Monday evening.

But, he said, “The negative side (to the downtown venue) was there was a smaller fallout zone” for the fireworks, which decreased the size of the display.

Councilman Jim Lamerson voiced support for continuing to have a private company conduct the celebration, noting that the new arrangement had “weaned” the community off paying for the event with taxpayers’ money.