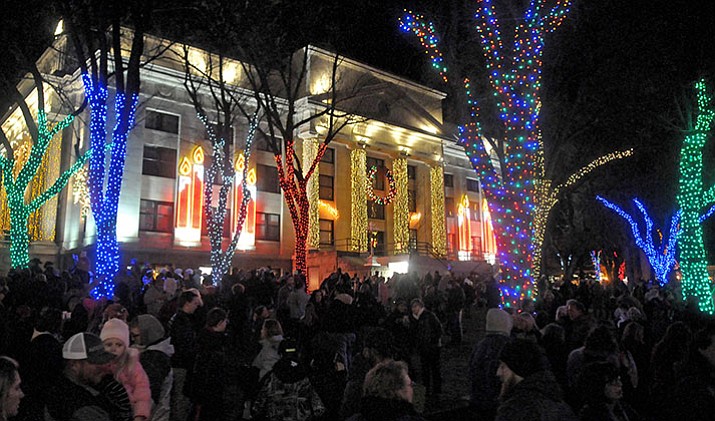 People fill the courthouse plaza for the 2015 Courthouse Lighting in downtown Prescott. The Prescott Chamber of Commerce estimated there were close to 8,000 people in attendance.

All eyes will turn to downtown Prescott this weekend, when two premier Christmas events will take to the streets and the Yavapai County Courthouse Plaza.

As has been the tradition for decades, the downtown will be the setting for two of the community’s biggest holiday events: The 34th annual Christmas Parade at 1 p.m., Dec. 3, and the 62nd annual Courthouse Lighting at 6 p.m., Dec. 3.

Prescott has long been the go-to spot for a small-town Christmas. It started in the mid-1950s with the traditional Courthouse Lighting, then grew in the early 1980s with the addition of the Christmas Parade, and later, with the popular Acker Night (scheduled for Friday, Dec. 9).

“It really is part of the identity of our community,” Kendall Jaspers, director of the Prescott Downtown Partnership (PDP), said recently of the Christmas City moniker.

And occurring as they do in the heart of Prescott, the Christmas events also bring more attention than usual to Prescott’s downtown. “It reaffirms the downtown as the heartbeat of Prescott,” Jaspers added.

The Christmas Parade will feature 86 entries this year, including everything from floats to walking groups to high school and middle school bands.

Entrants were asked to adhere to this year’s theme, “All I Want for Christmas,” and organizers say that allows for a wide assortment of ideas.

Prescott Chamber of Commerce CEO David Maurer said as many as 10,000 people are expected to turn out for the Christmas Parade, filling the popular viewing spots eight to nine people deep.

The parade starts at the corner of Willis and Cortez, and Maurer says many of the spectators tend to congregate on Cortez along the Yavapai County Courthouse Plaza.

For a slightly less populated space, Maurer suggests heading to Goodwin Street, near the Chamber of Commerce building (117 W. Goodwin St.), or in front the businesses along Whiskey Row (Montezuma Street).

A few hours after the parade, attention will turn to the Yavapai County Courthouse Plaza for the 62nd annual Courthouse Lighting. The lighting is scheduled for 6 p.m., while musical entertainment will begin at 5 p.m.

This year, Maurer says the Courthouse Lighting would follow the usual tradition of a choir singing Christmas carols and the reading of the Christmas story – all leading up to the illumination of the courthouse and plaza lights.

One new feature this year: A brief tribute to former Gov. Mofford, who died earlier this year, for her part in the Arizona’s Christmas City designation.

The Courthouse Lighting typically brings out an even larger crowd than does the parade. “Regardless of the weather, we usually have a huge crowd for the lighting,” said Chamber Finance Director Harold Viehweg.