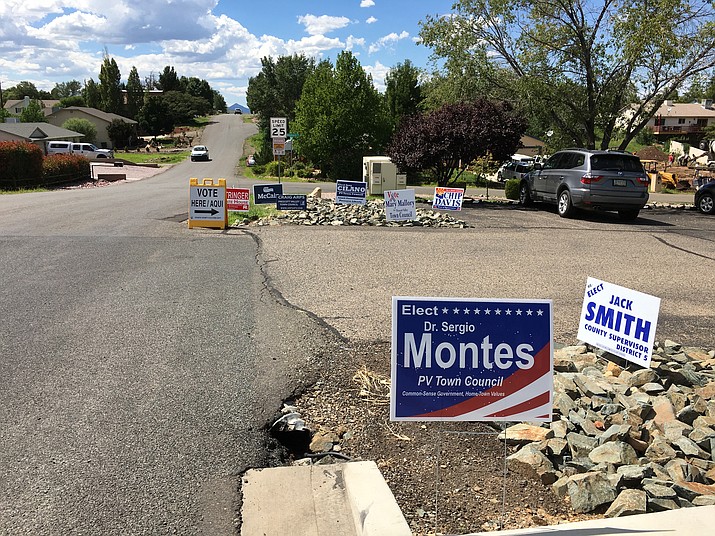 Campaign signs outside a voting center in Prescott Valley on Tuesday, Aug. 30, 2016.

It appears that Prescott Valley voters are happy with the direction the town is headed after reelecting all four incumbents to the Town Council in the Tuesday, Aug. 30 primary election.

The results are unofficial and subject to change, but with 100 percent of precincts reporting councilmembers Mary Mallory (3,373 votes), Lora Lee Nye (2,752), Marty Grossman (2,688) and Vice Mayor Rick Anderson (2,744) were leading the nine-candidate field, according to results posted by the Yavapai County Elections office.

The State of Arizona changed the formula for how candidates can be elected in the primary election, making it easier for them to avoid a runoff. The previous formula was the number of ballots in the election (remember each voter votes for more than one candidate), divided by two, plus one.

The new formula is total votes cast in the race (21,140), divided by the number of open seats (4), divided by two. Round that number up and that is the number of votes needed to be elected. That number according to the unofficial results is 2,643. All four incumbents surpassed that total.

Also, Prescott Valley voters approved the Home Rule Option, which allows the town to maintain control over its own spending limits, by a 76.3 percent to 23.7 percent margin. If voters had rejected Home Rule it would have meant the town would be limited to an amount based on a formula in the state constitution and would be forced to make drastic cuts to its spending.

Voters must approve the Home Rule Option every four years. Only once in Arizona history has a community not approved it, and that was Florence in 2014.

The Town Council approved a half-cent sales tax increase last year to fund road improvements and increases in the police department’s budget. That increase became the top topic of the council election. The town's portion of the sales tax increased from 2.33 percent to 2.83 percent.

PV Police Chief Bryan Jarrell was criticized because of his public comments about the election, saying he was concerned by remarks from a couple of challengers that they wanted to rescind the sales tax increase and what it might mean for his department.