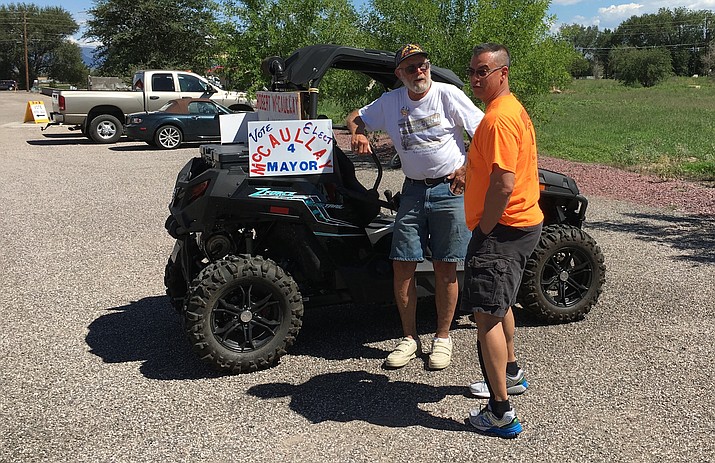 Chino Valley voters appear to be happy with the direction the town is headed after six incumbents running were headed toward being reelected to the Town Council in the Tuesday, Aug. 30 primary election.

The results are unofficial and one Chino Valley precinct had not reported, so it’s subject to change. Vice Mayor Darryl Croft held a 56.6 percent to 43.2 percent lead over Robert McCaullay in the race to replace Mayor Chris Marley, according to results posted by the Yavapai County Elections office.

The missing precinct is the Coyote precinct, which is the smallest of the three, according to Jami Lewis, Chino Valley's town clerk.

There were only three candidates for three four-year seats on Council. Incumbents Jack Miller and Susan Cuka, who were appointed to their seats after resignations last summer, and newcomer Annie Lane, a member of the town’s Planning and Zoning Commission, are headed toward being elected.

In the race for the three two-year seats on Council, incumbents Lon Turner, Mike Best and Corey Mendoza were leading with the one outstanding precinct still to be counted.

The State of Arizona changed the formula for how candidates can be elected in the primary election, making it easier for them to avoid a runoff. The previous formula was the number of ballots in the election (remember each voter votes for more than one candidate), divided by two, plus one.

Also, Chino Valley voters approved the Home Rule Option, which allows the town to maintain control over its own spending limits, by a 68.8 percent to 31.2 percent margin. If voters had rejected Home Rule, it would have meant the town would be limited to an amount based on a formula in the state constitution that would have meant drastic cuts to services.

Voters must approve the Home Rule Option every four years. Only once in Arizona history has a community not approved it, and that was Florence in 2014.

In addition to the missing precinct in Chino Valley, Yavapai County election officials are also counting up provisional ballots, write-ins, early votes so results could change.