Senior-heavy Badger club looking to pick up where they left off in 2015 (VIDEO)
Smith: ‘Overall, we have a solid club’ 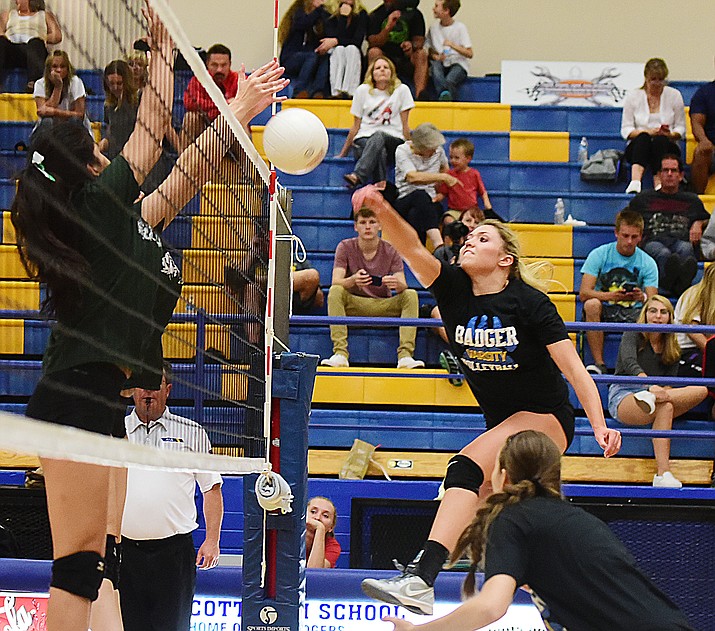 PRESCOTT – After one of the most successful campaigns in program history turned into a disappointing first-round exit at state last season, this fall, the Prescott volleyball team is looking to pick up where they left off.

And with eight returning seniors, plus a crop of talented young players that are new to varsity in 2016, the Badgers may do just that.

Senior outside hitter Abbey Smith said the Badgers are looking strong in “multiple areas” and pointed out with so many returning players, they are prepared for 2016.

“This year, we have a lot of experience coming back. … We have strong hitters, strong libero’s and setters. Overall, we have a solid club,” Smith said, adding the team will need to continue to work on their communication skills and level of intensity if they hope to be successful this season.

“He coaches us like anyone should. He pinpoints a lot of things, watches us specifically to our positions,” Smith said. “He’s experienced in the volleyball field.”

Ramirez said his first training camp with the Badgers has gone as expected with a senior-laden club. The “foundation” is there, but Prescott will still have to work, he said.

“We’re just like every other team, doesn’t matter how good you are, there’s always things to work on and to focus on in practice,” said Ramirez, who played men’s volleyball at the collegiate level for Grand Canyon University.

Ramirez brings that experience to the table as Prescott’s new head coach.

“I bring some of those aspects of that type of volleyball into the girl’s team,” Ramirez said. “Because really, where sports is going … it’s how fast and how under control can you play.”

Erinn Marroquin, a senior setter, said the team’s chemistry has continued from last season, and the new girls have fit right in.

“The girls we added this year are really good. There’s a lot of young talent, so just adding the experience with the new talent, I think, will turn out well,” Marroquin said, adding the Badgers have worked mostly on their defense, and getting a setter-hitter connection going.

“Passing makes or breaks a team. [Coach is] instilling in us that we need to have good passing if we want to win games,” Marroquin said.

One of those young standouts Marroquin speaks of is sophomore libero Sabina Dimaano-Simmons, who made varsity for the first time this year.

“It felt really good to make this team,” Dimaano-Simmons said. “I looking forward to watching my teammates perform. I look forward to the tournaments and seeing what we’ll improve on.”

In addition to Dimaano-Simmons, Danielle Dreher, Daphne Skinner, Madison Wood and Nickella Wright have made the squad.

Ramirez said Prescott’s success in 2016 will depend on how “humble” the teams remains, and not getting “over cocky.”

“That is something we have discussed as a team. Staying focused, staying humble and being positive to improve our team chemistry,” Ramirez said. “We need to prove ourselves day in and day out.”