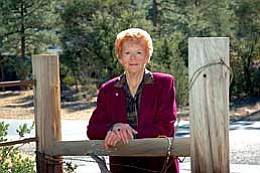 Florence “Flo” May Tyree Day, beloved mother, grandmother and native to Prescott, booked her last flight, with the angels, on August 25, 2016, at the young age of 86.

Flo was born in 1930 in Prescott, Arizona to her beloved parents; Noel Byron Tyree and Stella Susan Bacon Tyree.

Flo was raised on Walnut Creek Ranch, attended school at St. Joseph’s Academy in Prescott and Mount St. Mary’s College in Los Angeles, California. After school she married Carl Daniel Day and together they had five children. They raised their children in Chandler, Arizona and remained married until Carl’s passing in 1980. Flo later married John W. Miller and moved back to her hometown of Prescott, Arizona, where she remained until her death.

For 43 years Flo was an active and prominent figure in the Real Estate community; teaching classes and serving on numerous boards and committees including PAAR President. She was the only Realtor to be awarded Realtor of the Year twice for 2004 and 2009.

A dedicated Catholic, Flo found great comfort in her faith. She loved her family and friends immensely. Her favorite

past times included gardening, cooking and sitting on her porch telling stories about life on the ranch, Papa, boarding school and her heritage. She was admired by many for her grit, strength and fiery character. She was a true elder in our family and her wisdom, guidance, and loving support will be greatly missed.

In lieu of flowers the family requests donations be made to the Marley House, Good Samaritan Hospice Facility in Prescott, Arizona.