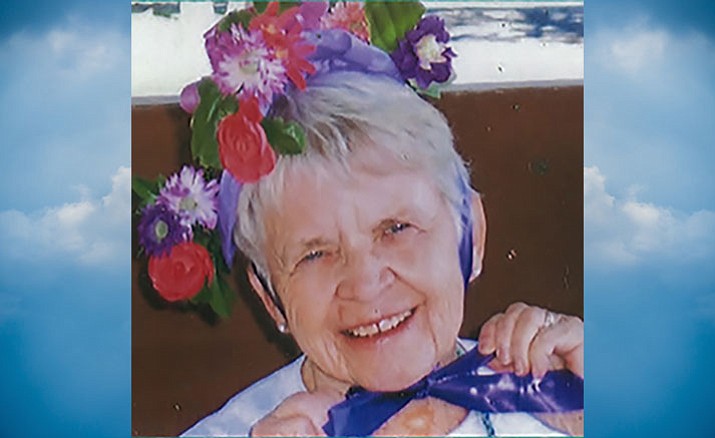 Carmen passed away in Prescott, Arizona on August 4, 2016 at 10:05 p.m. She is survived by her husband, Fred Farmer (Carlson) of Prescott Valley, Arizona; her daughters Sally Farmer, of South Pasadena, California and Cindy Hedrick of Columbus, Ohio, and her sister Linda Holt, of Clearlake, California. In addition, Carmen has four grandchildren: Trina, Jeff, Evan, and Nicholas, and three great-grandchildren: Carter, Carmen, and Carson. Preceding her passing are Jay (son), Bonnie (sister), Darlene (sister), and Durwood (brother).

Carmen was born in Dickerson, North Dakota. Her mother moved the family out west in the forties to join her father, who worked on Whidbey Island, Washington. From there the family moved to Yakima, Washington, and a short time later to Kennewick, Washington. In Kennewick she attended grade school through high school, where she was active in drama, winning the Thespian of the Year Award. Although not very athletic she was on the pep squad. She loved to sing and was also in the school chorus. English was her favorite class; she loved to read and always wanted to be an English teacher. She went with Fred for part of high school.

Carmen attended Central Washington College for a year after graduating. While home for summer break and Fred home on leave from the Marine Corps, they became engaged and were married six days later. They have been married 61 years. After a short stay at Camp Pendleton they moved to San Jose, California where Sally, their first child was born; then to Kennewick, Washington. They weren’t going to have any children until Fred finished college and Carmen earned her teaching degree, but by the time they had been in Pullman, Washington for two years and Fred had graduated, they had two more children, Cindy and Jay.

The family moved many times after that, from Anacortes, Washington to Bozeman, Montana, where Carmen finally started back to college. During this time Carmen and family lived for two summers in Yellowstone National Park. Fred received a commission in the U.S. Public Health Service, so off to Cincinnati, Ohio. From there Fred inspected national parks and monuments, and the family went with him in the summers, staying in a little Scotty travel trailer. During this time Carmen attended the Univ. of Cincinnati and the Univ. of Miami, Ohio. Fred was then transferred to San Francisco, California, where Carmen attended Calif. State College, Hayward, and graduated with a Bachelor of Arts degree in English. It was a hard road for her. After moving to Northridge, California she received her California teaching certificate and taught high school English and journalism at Kennedy High School for 18 years.

After retirement Fred and Carmen lived on a 25-ft. sailboat in Marina Del Rey, California. They sailed the San Juan Islands in Washington and, Canadian waters, Florida’s west coast, the Florida Keys, the Chesapeake, and 1000 miles down the east coast to Florida, then 500 miles in the Bahamas. Carmen was Fred’s first mate: she would not allow a second mate. They bought a house and R.V. in Englewood, Florida and travelled the northern states and to northeast Canada. Moved to Prescott Valley where she had many friends from the R.V. Club, Bunco Ladies, and bowling league.

For four months Carmen was in heavy pain, which she managed with little complaint. Her illness was caused by an inoperable non-cancerous tumor. We will miss her greatly and her memory will be cherished.