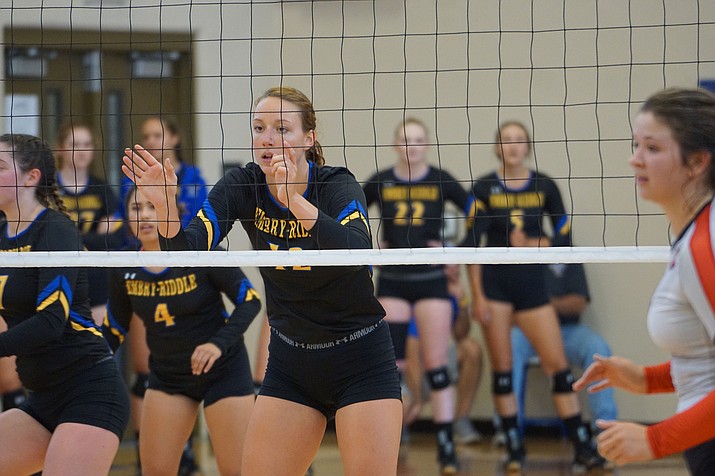 PRESCOTT — Jalin Yoder had 12 kills and 11 digs, Hanna Mercurio added 20 assists and the Embry-Riddle volleyball team boasted a .313 hitting percentage in a 3-0 sweep of Arizona Christian on Saturday afternoon.

Jordan Jones was second on the team with 11 kills as the Eagles have won three of their first five matches to begin the season.

Embry-Riddle (3-2, 0-0 Cal-Pac) will travel to Lancaster, California, to participate in the Antelope Valley Tournament beginning with Mayville State on Friday, Sept. 2, at 12:30 p.m.

The Eagles will not return home until Sept. 16 in the Cal-Pac opener UC-Merced at 7 p.m.

LAS VEGAS — After getting swept 3-0 by Snow College in the first match of the Coyote Classic, the Yavapai College volleyball team closed out the tournament with three straight wins, including a 3-2 victory over Lee College on Saturday afternoon.

Kaitlyn Yost led the Roughriders with 14 kills and five block assists, Jordan Tilley had 25 assists and Hannah Semon recorded 19 kills in the win over Lee.

Yavapai (3-2, 0-0 ACCAC) returns to Prescott and will host Eastern Arizona in their home opener Thursday, Sept. 1. The match with Eastern Arizona is also the first ACCAC match of the season for the Roughriders. Official start time is set for 7 p.m.

GLENDALE — Carlo Quesada scored two goals before Yavapai College men’s soccer fans grabbed their seats, but Ziyad Fares’ free kick in the 81st minute proved to be the game winner in a 3-2 victory over Glendale Community College on Saturday afternoon.

Quesada’s goals came in the 12th and 13th minute of the match, giving the Roughriders a 2-0 advantage, but Glendale’s Jeisson Palencia made it 2-1 off an assist by David Cox. Glendale tied it off an own goal by the Roughriders.

Yavapai outshot the Gauchos 13-12 and goalkeeper Justin Motzkus recorded three saves for the Roughriders, which bounced back after a 2-1 season-opening loss to Chandler-Gilbert Community College on Aug. 23.

Next up, the Eagles will their seven-match road trip in Phoenix as they play Arizona Christian on Thursday, Sept. 1.

The match will be played at the Rose Mofford Sports Complex and is scheduled for a 7 p.m. start time.