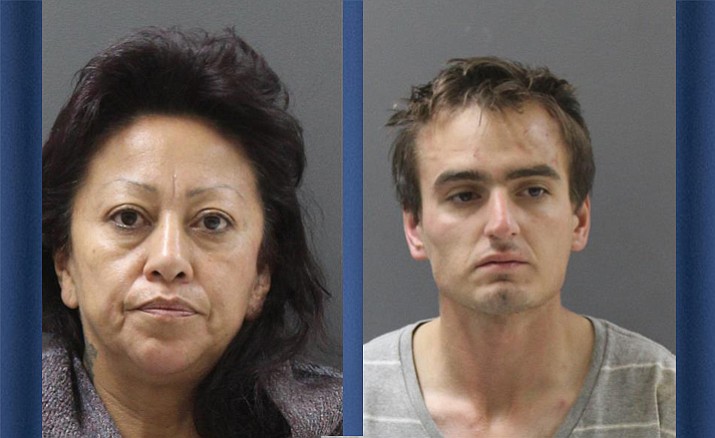 PRESCOTT — When detectives served a search warrant on a Prescott home Wednesday morning, Aug. 24, they arrested a woman and man on multiple charges related to drugs and reportedly stolen property found in the home.

The warrant was served at a home in the 1000 block of Opal Drive, after Partners Against Narcotics Trafficking task force detectives had evidence of meth and heroin sales from the home, according to a report from Yavapai County Sheriff’s Office.

A woman identified as 47-year-old Rebecca Saiz was immediately detained. She is on active probation with a current warrant for probation violation, YCSO said.

A man, later identified as 24-year-old Michael Pace, ran out of a south-facing door. He was caught after a short foot chase and Taser stun gun deployment.

In a search of the home, deputies found methamphetamine, heroin, opioid-based prescription pills packaged for individual sale, drug paraphernalia, meth pipes and two handguns. The type of drug paraphernalia observed indicated heavy drug/narcotic use involving both meth and heroin. The quantity of drugs seized included nearly 2 ounces of meth with a street value exceeding $4,000, and more than 16 grams of heroin with a street value exceeding $2,400.

A records check of the handguns revealed both had been reported stolen earlier this year, YCSO said.

Detectives also found three high-quality mountain bikes in the home. During investigative follow-up, they learned that all three – valued at more than $10,000 total - had been stolen. The bike owners have since been contacted and expressed overwhelming gratitude for the recovery of their bikes.

Saiz was booked at the Camp Verde Detention Center on charges including possess/use dangerous and narcotic drugs, possession of narcotics/drugs for sale, possession of drug paraphernalia, misconduct involving weapons, and multiple counts of trafficking in stolen property. She remains in custody on a $55,000 bond.

According to court sentence records published in The Daily Courier in June and ordered at Yavapai County Superior Court in Prescott, Saiz was sentenced April 26 by Judge Jennifer Campbell to two years of probation for the possession of drug paraphernalia.

Pace was booked on charges to include possess/use dangerous and narcotic drugs, possession of drug paraphernalia, theft, traffic stolen property, resist arrest, and possession of a firearm during commission of a felony. He remains in custody on a bond of $17,500.

Investigation continues into the actions of the suspects related to drug and property crimes.