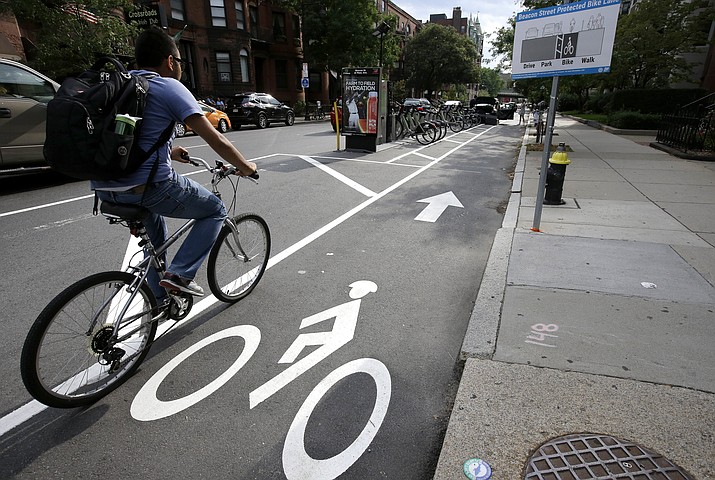 In this Tuesday, Aug. 16, photo, a cyclist enters a bike lane that is routed between parked cars and the sidewalk, right, in Boston. Chicago, New York, Boston, and other U.S. cities are reconfiguring bike lanes to make them safer in light of a spate of fatal accidents involving cyclists and cars.

Since the early 2000s, bicycle lanes have slowly appeared across the nation.

Bicycling is in the middle of a resurgence as a cheap way to commute, besides a recreational pursuit. However, this area is growing and the roads are becoming more clogged with vehicles than ever.

Prescott is billed as a mountain biking/cycling-friendly city, which is why it’s extra important drivers remember the roads aren’t just for motorized vehicles. We have commuters, residents and tourists on two wheels on the main roads at any given time.

The city is fortunate that Prescott’s Mayor Harry Oberg hosts an ad hoc Bicycle and Pedestrian Committee that studies and addresses the issues of bicyclists and bipeds. They have a voice here and many other cities are also listening to their riders.

Places around the world are handling bicycle lanes and safety in different ways, to varying degrees of success, according to the AP:

Tokyo and other Japanese cities have long had a strong cycling culture, but some of their protected lanes are placed directly on sidewalks. This does cause issues between pedestrian and cyclists rights-of-way.

London opened a number of “cycle superhighways” meant to eventually crisscross the city. Cyclists on these routes are separated from vehicle traffic at crucial segments by a curb. Officials have even entertained ideas of “elevated bicycle lanes.”

Buenos Aires has built nearly 90 miles of bike lanes, many of them protected, in just three years.

A recent CNN health program showed a cycling segment that featured one city’s solution to bicycle parking: They took one car parking space per downtown street and converted it into a bike rack that handles 12 bicycles. The downtown merchants backed the idea because that potentially allows them to draw in 12 more customers who wouldn’t normally stop in on their bicycle.

While some of these ideas are intriguing, they also cost money.

It costs nothing to use common sense when driving or riding a bike on a public road.

Both operators need to pay attention. Car drivers aren’t the only culprits when it comes to distraction. Bicycle riders fiddling with phones or bike computers tend to weave a bit into other lanes.

Take this is a reminder that with the new homes under construction and more people moving into the county, the roads will get more congested.

There won’t be any room for inattentiveness or useless road rage when that happens.

State of the bike
Nearly 200 pedestrians, cyclists have been hit on Prescott streets since 2013
Letter: Make biking safer by revising striping
Letter: Bicyclists should obey law, ride on right side of road
Case underscores danger to Prescott cyclists