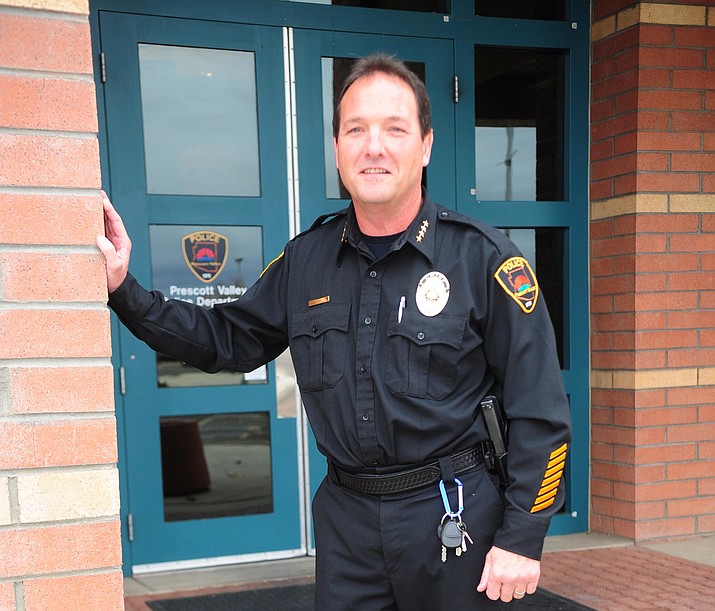 PRESCOTT VALLEY – Police Chief Bryan Jarrell is being criticized for comments he made in a Prescott Valley Tribune article on Wednesday, Aug. 17, calling the challengers in this year’s Town Council race “ignorant” of the realities of government and policing, and saying that their stated plans to repeal the town’s half-cent sales tax would devastate the police department.

The law on public expression

Here are the laws Steven Marshall quoted in Thursday’s meeting:

A city or town shall not spend or use its resources, including the use or expenditure of monies, accounts, credit, facilities, vehicles, postage, telecommunications, computer hardware and software, web pages, personnel, equipment, materials, buildings or any other thing of value of the city or town, for the purpose of influencing the outcomes of elections…Employees of a city or town shall not use the authority of their positions to influence the vote or political activities of any subordinate employee.

Nothing contained in this section shall be construed as denying the civil and political liberties of any employee as guaranteed by the United States and Arizona Constitutions.

Employees are prohibited from engaging in any partisan political activity beyond the private expression of personal opinion … Employees are also prohibited from engaging in any political activity beyond the expression of personal opinion, registering to vote, signing nominating or recall petitions, voting in any special, primary or general election…

He’s only met one candidate in person, Kevin Trovini; he makes his judgment based on what he’s heard them say in public forums and what he’s read in the newspaper.

Jarrell said that, as things stand, with the town giving him the funding to add staff, he’s able to stay about even with the growing population.

He’s also hired civilians who shoulder much of the burden that previously took up the time of the sworn officers and lets them get back on the street.

The problem, Jarrell said, is the challengers “are running on these platforms that are dangerous to the future and security of this town, as far as a safety perspective.”

The major problem he has with their platforms is their total objection to sales taxes.

“It scares me when I hear people saying … ‘the tax rates are too high, we’ve got to roll them back,’ because then all of us are going to suffer greatly,” he said.

“The only way we can support town operations…is through the sales tax,” he said, noting that the town gets none of the property taxes collected — it all goes to Yavapai County.

He said that the candidates could “sue the town if they lose, because the police chief went in the paper and told people not to vote for them.”

Noting that he holds the same views toward taxes as the challengers, he said, “my police chief is telling me and the people of this town my views are dangerous.

“I believe in my heart that I have to ask that the police chief be fired.”

Town Manager Larry Tarkowski said that, “There is a … violation of the town’s personnel rules and there’s been a disciplinary action.”

But Marshall said that wasn’t enough.

“This is very big,” he said. “If something doesn’t happen, I’m going to drive to the attorney general’s office in Phoenix and I’m going to file a complaint myself.”

No action was taken at that meeting.

Jarrell said on Friday, Aug. 19, that he wasn’t campaigning “for or against any candidate.

“The only thing I am campaigning for is a safe community,” he said.

In the Tribune story, Jarrell took issue with candidate Joey Cilano’s claim that “we already pay the third-highest sales tax in the state,” calling it “a blatant lie.

Cilano said that he believes there is enough room in the town’s $88 million budget to ensure the police department has what it needs, if council puts its priorities in the right place.

“If the council had given it a second look, then they could have found the money somewhere without increasing taxes,” Cilano said. “We need to have a new conversation about what everything is being spent on.”

Repealing the half-cent sales tax would have an immediate impact on Jarrell’s department.

“If that were to happen, I would have to lay off 12 people the next day,” he said. “And we go back to being a strictly reactionary police department, with, many times, the inability to respond to simple, non-emergency type calls,” like minor traffic accidents.

But candidate Craig Arps said Jarrell was making an assumption.

“What he’s saying is false. None of the candidates have ever suggested cutting the police budget,” Arps said. “We want lower taxes, but it’s not accurate to say he would have to cut the police budget for that to happen.”

Arps said he was concerned that Jarrell was taking a political position.

“It’s not part of the police chief’s duties to be commenting on politics, especially elections that affect his office. It’s certainly not ethical and not professional …that’s not part of what we pay him to do.”

Cilano said that he does support the Prescott Valley Police Department.

Councilmember Mary Mallory said on Friday, Aug. 19, “(Jarrell) is a good man. He didn’t do anything wrong. It’s really gone off the deep end.”